Organized opposition: Phillips 66 health and safety specialists allege they were punished for unionizing

On a late Monday afternoon in January 2012, a group of five health and safety shift specialists were called to meet with four managers of the Phillips 66 Santa Maria Refinery. And while the reason for the meeting was unclear before they entered the room, the five specialists got the distinct impression that it wasn’t an entirely friendly encounter.

“After they left we all agreed that the meeting was less of an ‘informational’ meeting and more of a ‘threatening’ meeting,” one of the specialists later wrote in a statement provided to New Times, though the writer’s name was redacted. 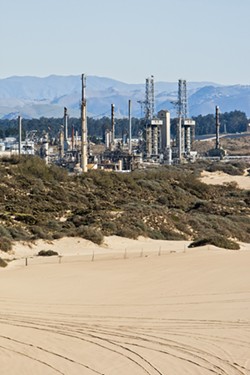 One of the specialists wrote in a statement that the human resources manager “stated that if we voted down the union we would work towards mending the fences.”

Those statements are now part of a complaint filed with the National Labor Relations Board, which alleges that after the specialists voted to join the union, Phillips 66 management carried out its threats.

“We discussed the meeting and [the superintendent of operations] told us that he was concerned about us and that the company had plans for us, which were not very pleasant,” one of the specialists submitted in a written statement for the case. “He confirmed very clearly that they did not want other refineries’ … safety personnel to join the union.”

In its response to the complaint, the company denies that any threats were ever made against its health and safety specialists, and that subsequent modifications to their job descriptions “were for legitimate, nonretaliatory business reasons and were not based upon any alleged anti-union animus.”

But according to Joe Stuligross, associate general counsel for the United Steelworkers, headquartered in Pittsburgh, “The company took a position entirely consistent with the threats it made.”

The health and safety specialists allege company officials warned that if they joined the union they would lose hours, be stripped of managerial powers, and as many as three of them could lose their jobs.

“The insinuation here was that, ‘We may not need all of you,’” one of the specialists said in a written statement submitted to the labor board.

When the newly unionized group went to the bargaining table, Phillips 66 imposed its final offer on a proposed contract on Dec. 10, 2012. The offer allegedly included the threatened reductions of hours and responsibilities. The refinery’s health and safety specialists serve as organizers of the plant’s emergency response crew. Though none of the health and safety specialists was fired, three of them were transferred from their primary roles into regular plant operations, according to the complaint.

The union is seeking to recover lost wages for the health and safety specialists, and to have their original job functions restored. Those lost wages totaled as much as $17,000 per year for some employees. In its complaint, the union further alleges that Phillips 66 bargained in bad faith when it imposed the 2012 contract.

The company responded that the contract was implemented after it became clear the two groups had reached an impasse in negotiations. Phillips 66, in its responses to the union’s complaint, said the company reduced the five health and safety specialists to two as part of regular staffing changes, and the job functions were distributed across other personnel.

“There is no value more important in our company than ensuring the safety of everyone who works at our sites as well as the safety of our neighboring communities,” Phillips 66 spokesman Dennis Nuss said in a written statement to New Times. “In 2012, Phillips 66 redistributed certain safety-related functions and responsibilities among personnel at the Santa Maria Refinery, and there were no staff reductions. These changes have helped maintain and improve the refinery’s high standards for safety performance.”

Stuligross contends that by shifting responsibilities away form health and safety specialists, “certainly there are some safety issues that are inherent.”

In addition to the reduced contract for health and safety specialists, the union alleges that the company violated federal labor laws when it implemented “news media guidelines” in October 2012. Those guidelines instructed employees not to speak to news media and, “It is against company policy for anyone but an authorized company spokespersons [sic] to speak to the news media.” (At the time, New Times was reporting on the issue for the December 2012 story, “Re(de)fining safety.”)

The company defends its policy as a routine business practice that violated no labor laws. Stuligross, however, maintains that it’s unlawful for an employer to tell its employees not to talk to others about the terms and conditions of their employment.

As of press time, a trial for the case had recently wrapped up. Stuligross said both parties are still scheduled to file final briefs before an administrative law judge issues a ruling.