PCPA Casting Director Erik Stein's original show, Holiday Dinnertainment, will be performed at the Cambria Center for the Arts through Dec. 23, with Friday and Saturday shows starting at 7:30 p.m. and Sunday shows starting at 2 p.m. Tickets are $25 per person. Visit cambriacenterforthearts.org for more information. And no, dinner is not included with the show.

There's nothing quite like getting a glimpse behind the curtain, to see the messy, intricate inner workings of how something is made.

The Pacific Conservatory Theatre's (PCPA) casting director and associate artist, Erik Stein, literally and metaphorically pulls back the curtain for audiences with the debut of his original comedic farce, Holiday Dinnertainment, which opened Nov. 30 in its world premiere at the Cambria Center for the Arts Theatre (CCAT). This charming show takes us to the Prime Rib Playhouse Dinner Theatre, an establishment that boasts offering "Broadway shows at small town prices," and begins each performance with the parading of the prime rib that will be served for dinner. This is where our ever-hopeful protagonist, Joel (Josh Gamble, a recent PCPA grad), finds himself working as an actor straight out of college. Cue the madness and shenanigans. 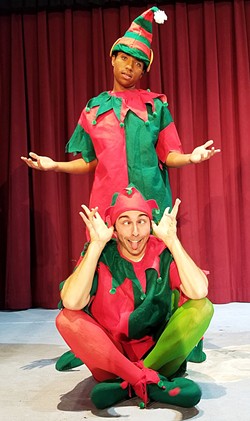 Joel can't find Sue (Jill Turnbow, artistic director of CCAT), the wacky artistic director who hired him, and is introduced to everyone by a senior actor, the silver-tongued Ken (Greg DeMartini, seen locally at the SLO Repertory Theatre and By The Sea Productions). There's Gina (Tara Brinkman, seen recently in SLO Rep's The Other Place), a very pregnant actor who plans to work through the holiday show, or until the labor pains start. And then there's the super nervous actor, Teresa (Danielle McNamara, seen recently in CCAT's Bus Stop), who wants so badly to impress Sue after being promoted from acting in the children's summer theater to the main show. Grumbling about the practicalities of running the theater is Sue's partner in business and life, Madge (Jo Jackson, seen recently in Wine Country Theatre's Moonlight & Magnolias). Our simultaneously loveable villain and anti-hero is Erich (Garrett Larsen, a CCAT regular), the stage tech guy who yearns to be an actor, front and center in the spotlight.

The entirety of the show takes place both behind the stage, where real-life dramas big and small play out, and on stage, where the cast performs and rehearses the show within the show. Director Lisa Woske (credits include directing Moonlight & Magnolias with Wine Country Theatre) cleverly makes use of the space to maximize the comedic moments and the intimate, behind the scenes feel.

Stein, whose acting credits include shows on Broadway, wrote Holiday Dinnertainment while performing in a Midwest dinner theatre. In the program he jokes that "about 85 percent of this play is true!" And his experience shows in playful winks to the theater life, from the actors getting more work done without their hapless, semi-crazed director around, to the dance numbers that keep changing even minutes before opening night, to a hilariously cheeky number poking fun at music copyright with its off-brand holiday songs.

In perfect theater form, everything that can go wrong does in this seasonal story. But Stein, Woske, and the cast keep audiences upbeat and laughing with a stream of puns, silly songs, and on-the-nose commentary about the realities of putting on a show during the holiday season. For a dose of good cheer and festive fun, consider adding a viewing of Holiday Dinnertainment to your Christmas to-do list. Δ

Arts Writer Ryah Cooley is laughing in the back row. Contact her at rcooley@newtimesslo.com.