How one busted elevator drew the ire of court staff, county administrators, an assemblyman, and the disabled

That’s one of the more restrained comments recently made about an elevator at the San Luis Obispo Superior Court Annex, an elevator that’s been useless for four months. It’s more than an annoyance, since some people depend on it. 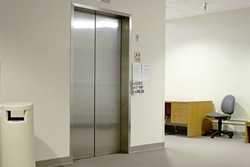 The elevator has been out of operation since October due to a number of mechanical problems. Court staffers noticed the elevator appeared to be losing hydraulic fluid, causing the car to sink, according to the court’s facilities coordinator.

In those four months, officials from all levels of local government have been scrambling to address the problem, with a little inspiration from a federal complaint to the U.S. Department of Justice.

Without the elevator, visitors and staff must use a secondary elevator that only provides access to the top three floors of the four-story building. The bottom floor, which houses five courtrooms, can only be accessed through a stairway from the inside.

Court staff maintains that every floor and courtroom is indeed accessible. An intercom system installed outside the bottom floor’s glass doors—not typically used as an entrance—pipes through to security personnel on the second floor. If someone calls, security must walk down to the first floor to let people with disabilities inside, after a screening.

But that doesn’t mean there hasn’t been plenty of confusion, frustration, and blame to go around.

San Luis Obispo resident Scott Barnes, a retired military veteran, suffers from a number of disabilities stemming from his service, necessitating a brace for both his back and knee. He’s spent the last 10 months fighting a “petty” traffic citation, which has required him to access the courthouse four times in the past two months, he said.

After he made multiple complaints to staff about poor access for the disabled, Barnes said he was essentially told that everyone was aware and that they were working on it. More than a month later, feeling he was getting nowhere, Barnes took his gripe outside the court, to County Supervisor Bruce Gibson, and then to State Assemblyman Katcho Achadjian.

“Scott came in to the office and alerted us that there was something very major wrong over at the courthouse,” said Vicki Janssen, district director for Achadjian’s office.

Janssen said she contacted County General Services and was assured that fixing the elevator was a priority.

“Of course, someone with a disability needs to have access to an elevator,” she said.

Still, Barnes said, progress seemed to move at a snail’s pace, and his efforts to talk to somebody with Americans with Disabilities Act (ADA) expertise were muddled. On Feb. 7, he filed a complaint with the Civil Rights Division of the Department of Justice, the federal agency tasked with handling ADA complaints for courts and correctional institutions.

A representative for the Department of Justice did not return New Times’ request for comment.

A day later, Barnes filed a similar claim with the county. Though a claim is typically the first step toward a civil lawsuit, Barnes said he hopes the negative attention will spark action.

“I’m doing this not just for me, but on behalf of all disabled veterans who have had to repeatedly deal with this,” Barnes said. “I don’t want money, I want them to fix this thing. Four months? I mean, come on.”

In his complaints, Barnes accused the county of being out of compliance with the ADA.

“I [met] one lady in a wheelchair [with] no legs, on oxygen, that could NOT access the building floors and left in tears not knowing what to do,” he wrote in his complaint to the Department of Justice, pointing to a lack of exterior signage to direct people with disabilities to the proper entrance.

Barnes also claims there was confusion as to who was designated the county’s ADA coordinator, required by law to be provided as the go-to person for disabled people with questions about access or accommodations.

“When I asked who our coordinator was, they told me we didn’t have an ADA coordinator, but we will next week,” Barnes said.

Three days after he filed his complaint, Barnes received a call from John Schwind, safety officer for the county’s risk management office, who apologized for the inconvenience and informed him of the county’s two designated ADA coordinators, one for county employees and another, Katie Perez, at the county’s General Services Agency.

SLO County Counsel Warren Jensen, who is investigating Barnes’ claim, told New Times it appears the county was at all times in compliance with ADA guidelines, but acknowledged there was “a problem.”

“I believe we are in compliance, but we take [ADA complaints] seriously and will always investigate,” Jensen said. “Hopefully this will get resolved soon.”

The county is drafting an official response to Barnes’ claim. But regardless of whether the county was violating ADA requirements, the consensus from court staff is that the wheels haven’t moved fast enough.

“We’ve all been screaming about it,” SLO County Court Executive Officer Susan Matherly told New Times. “We’ve complained, we’ve threatened, but I really think the county’s been doing everything they can. The elevator’s old, and to do any kind of work on it takes time.”

Matherly said she understands the frustration from court-goers—especially those not familiar with navigating the facilities—but their frustration mirrors that of her own staff.

The extra running around required to get court documents from courtroom to courtroom, floor to floor, for example, has forced staff to come in early and stay late to make sure files and records get where they need to go without slowing down daily operations.

“We all want this fixed—it places a burden on everybody,” Matherly said.

If there’s one thing the county courthouse can do without, it’s another burden. The court is waist-deep in a roughly $1 million shortfall for the 2011-12 fiscal year, which has been mitigated in part by reducing staff hours and court services.

According to County Administrative Analyst Vince Morici, the elevator work is estimated to cost about $220,000. However, for once, budget constraints aren’t the issue. The state’s Office of Court Construction and Management will pick up most of the tab. The scope of the work, however, and finding the vendors to fix the elevator have contributed to the sluggish pace.

“A project of this size is an involved process. You can’t just do something on a whim just because it’s an inconvenience,” said Tim Roberts, the court’s facilities coordinator. “Whenever you have a project where you’re literally moving people, you need to research everything and figure out which fix would work best for longevity.”

Since October, the county has conducted a bidding process to select a vendor, Roberts said. The work will require crews to drill roughly 30 feet into the ground to replace a hydraulic shaft, and will likely take about a month to complete.

Perhaps it was a matter of good timing, but two days after Barnes filed his claim, signs displaying access routes for the various floors were suddenly posted around the court’s exterior. Also, on Feb. 9, county administrators announced they’d sealed a deal with a vendor and were “mobilizing” to begin work. According to Roberts, crews began work on the weekend of Feb. 11.

After consulting a number of SLO judges, court CEO Matherly said she was assured no one had received a “failure to appear” because they couldn’t access their courtroom.

Cindy Conn, a disabled veteran and office manager at the SLO Vet Center, told New Times she has had to personally return to the courthouse six times since the beginning of December to attend an ongoing case, and has had to use the stairs each time.

“It’s just a major pain in the knees and in the ankles,” Conn said. “Luckily, I am able to [climb] the stairs, but I can definitely understand why people are upset. Hopefully they get it fixed soon.”

One person who works at the court and didn’t want to be named summed up the frustration: “Believe me,” the employee said with a roll of the eyes, “if they had the damn thing up and running yesterday, it wouldn’t be soon enough.”