Out of 'unsafe' structures, but to where?

The cooling breeze was a welcome one, breaking the still heat of the late afternoon. Dan DeVaul smiled and leaned back against the trunk of a eucalyptus tree, shaded and peaceful. Or so he seemed. The only indication that tranquility was lacking at the DeVaul ranch on Sept. 2 was the subtle tremor in Darcene Clayton’s hand as she lit a cigarette.

Clayton, a resident of the Sunny Acres clean and sober living facility, which DeVaul owns and operates on his property, sat with the rancher, anticipating the arrival of SLO County code enforcement officials to announce her impending eviction from the mobile home where she stays. She, along with three other inhabitants of what the county deems “unsafe” living quarters at Sunny Acres, are being forced to evacuate their homes.

Ten years sober and firm in her convictions, Clayton said she’d have to be “physically removed” from her residence, a singlewide trailer without electricity (per county code) or a working shower, which doubles as a donation storage center for Sunny Acres. “This is my home,” she said. “I have nowhere else to go, or live. They’ll have to drag me out.”

Clayton stood her ground, ready for battle, as county code enforcement officials Marie Cowan and Jill Bennett barreled down DeVaul’s dirt road at 4:40 that evening. Their car, and the sheriff’s deputy patrol vehicle behind it, stirred up a cloud of foreshadowing dust that mimicked the smoke of Clayton’s Marlboro Light.

The message they brought was unclouded, though, and not unexpected, especially by DeVaul. Despite an abatement order upheld by County supervisors, DeVaul had reported to senior code enforcement investigator Cowan that he had missed an Aug. 30 deadline to vacate all substandard structures on his property. Cowan’s visit to Sunny Acres that same day included an investigation of DeVaul’s property, which confirmed his report, an announcement of evictions, and the delivery of “relocation benefits notices,” to the evicted tenants that state that DeVaul can be held responsible for finding new homes for his tenants, and paying for their move, if they so choose. 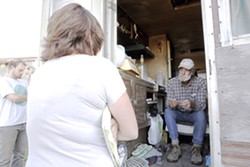 DeVaul was also under requirement to bring a fruit stand on his property up to code by Aug. 30, which he did by obtaining a number of permits, according to Steve Jones, Sunny Acres’ project manager. Though pleased about the fruit-stand victory, Jones said he was frustrated by the repeated refusal of the county to work with DeVaul in his efforts to assist needy community members, and fearful for the soon-to-be homeless Sunny Acres tenants. “Some people think these structures aren’t safe,” said Jones, “but the world isn’t safe!”

According to DeVaul, the evicted Sunny Acres tenants are welcome to pitch tents on his property and stay in them, which isn’t against county code. Some Sunny Acres inhabitants currently live in tents. “I don’t feel right about putting some of these people out in tents—they’re medically not up to it.” Jones and Clayton expressed similar sentiments.

Cowan didn’t give an exact deadline for the evacuation of the substandard structures, but said it would be “sometime in the next few days.” When asked how the county will respond if the tenants refuse to vacate their homes, Cowan said “We’ll cross that bridge when we come to it.” Clayton says she’ll do whatever she has to, to stay out from under that bridge, or any other.