Out on the tiles

Mark Freear lives for the surreal rush of travel.

“When you come to a brand-new place, your senses are just reeling. You’ve never seen it before, you’ve never smelled it before,” the painter explained, sitting in his airy living room. “You want to capture it.”

But while most travelers can be seen with camera at the ready, Freear prefers to save his first impressions in the form of paint on canvas, a medium more capable, perhaps, of capturing the initial emotional oversaturation of arrival, when the colors seem to bleed together deliriously, weird scents tease the nose, and the language bounces strangely around in the ear without ever settling into the intellect. (Freear, who draws much artistic inspiration from travel to Portugal, admits he “used to die laughing at how the Portuguese talk.”)

Later, of course, those brilliant colors fade to normal, the scents are barely perceptible, and the everyday dirt comes into view. But it’s those first few moments the artist treasures, as evidenced by a glance at his impossibly colorful repertoire of Havana street corners, Portuguese boat docks, a lazy Mexican beach, or a Peruvian doorway, all of them drenched in the wonder of first arrival.

Every year, the painter says, he travels somewhere—often to a warm country where living is comparatively cheap—and paints. He considers the sense of removal from one’s daily distractions integral to his artwork.

“Traveling, you’re your own person,” he says. “It easier; you’re not among your peers.”

A painting of a Havana balcony unlocks memories of a long-ago trip to Cuba with New Times’ own Glen Starkey: The music columnist, Freear recalled, vanished one evening from the apartment where the two were staying, only to be discovered several moments later whistling from the balcony of the apartment across the street, apparently having garnered himself an invitation from the woman who lived there. 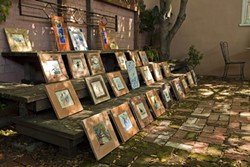 Freear’s latest work, part of a Steynberg Gallery show hanging throughout June, is a bit of a diversion from his usual depictions of boats, field workers, and missions. Inspired by Portuguese azulejos, decorative ceramic tiles painted with cobalt blue, his latest series straddles the border between traditional and modern, between decoration and fine art. Azulejos are generally integrated into the architecture of Mediterranean homes and churches, and their illustrations often reference Portuguese history and culture. But Freear has put his own spin on the tiles’ traditional purpose, using them to make a point about contemporary culture rather than tell tall tales of the past.

To create a work titled Toys R Us (still under construction at the time of our interview), Freear pressed toy weapons into the ceramic frame, creating surprisingly ominous-looking indentations. The image is a small but significant component of the piece as a whole; a small target of the sort used for shooting practice, over which Freear plans to place a layer of automotive glass. He’ll then complete the piece by shooting a few holes into the glass, he explained.

The message of the work is subject to interpretation (the early exposure of children to violent imagery? the frightening ease of acquiring a firearm?), but it’s a clear departure from the artist’s pacific images of banana harvesters and boats.

Another piece in the works follows a similar pattern, only the glass has been replaced by a mirror in which the viewer is forced to see his or her self though the crosshairs.

Bicycles are another Freear staple, and the motif shows up in his tiles as well, framed by chains or tire tracks.

Freear, who does construction work when not painting and traveling, prefers to display the tiles the way the Portuguese do: embedded into a wall. For his upcoming Steynberg show, the artist has cut holes into slabs of drywall, into which he plans to mount the tiles before placing the slabs against the gallery walls, creating the illusion that his pieces are literally part of the architecture.

Soon, of course, Freear will likely be gone again, off on another adventure in Columbia or Indonesia, mind reeling, his days dedicated to the absorption of local culture and the transference of those impressions to canvas. It’s an enviable existence, to be sure, but by no means an easy one. The artist himself readily admits he doesn’t always get it right, aesthetically and emotionally speaking.

“Sometimes I could spend a lifetime on it,” Freear said, referring to the objective of capturing a place’s essence while simultaneously creating a work of art that radiates that special cosmic rightness. “It’s a lot easier to sweep a floor.”

Arts Editor Anna Weltner has never been here before. Contact her at aweltner@newtimesslo.com.