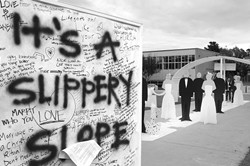 #A temporary art installation at Cal Poly stating that gay marriage could open the door for humans marrying animals has angered and confused Cal Poly and Cuesta students and teachers, as well as local activists.

The project was one of several around the campus that was created by students in a landscape-architecture class. One project featured a black coffin and an American-flag motif; another included a human-sized Easter bunny nailed to a crucifix, a painting of Jesus defecating an Easter egg, and a cash-covered Santa lying in a cradle in a traditional Christmas manger scene.

The most controversial was made to look like a wedding procession: Pews rise up out of the lawn on ether side of a walkway. An arch overhead holds a sign that asks, â€œWhat is marriage anyway?â€? Wooden cutouts painted to look like men and women in tuxes and wedding gowns walk side by side down the â€œaisle.â€? Two men stand together. Two men flank a woman.

Following up the procession is a man standing next to a dog.

Behind it all, four panels â€” each spray-painted with statements like â€œLegalization of gay marriage leads to social disintegrationâ€? â€” were set up for people to write comments on.

Conrad Mendoza, a graduate student at Cal Poly and the coordinator of youth services at the Gay and Lesbian Alliance, spotted the art installation as he walked to class on Monday morning.

â€œThere was hardly anything written on the board except for â€˜Fuck Fags.â€™ Thatâ€™s what I walked up to,â€? he said. â€œThere was nothing that said who [the project] was done by or why it was there or who to contact.â€?

Mendoza said that when he finally got to class, tears began to form.

â€œI sat in class and pretty much didnâ€™t hear anything the teacher said because the only thing that kept going through my head was, â€˜What the hell is going on? Why is this here?â€™â€?

Beth Diamond is the professor who assigned the project. She says her goal is to get her students to address ideas of free speech and the role of public space in a democratic society. Because of that goal, she wonâ€™t censor the projects that are installed.

Despite this, Diamond said there was a lot of class discussion about them beforehand. For the gay marriage piece, she and many of the students in the class argued against the inclusion of the dog. But, she said, the five students behind the project were able to prove that it was an argument used by many in the anti-gay-marriage movement.

â€œThe opinion is not going to just disappear because no one talks about it. In fact, this opinion is something that everybody has to face in the outside world,â€? she said. â€œIs the campus supposed to be some idealized oasis protecting the people within? Or is it a microcosm of the society as a whole?â€?

On Tuesday, Nov 9, several panels were covered with messages decrying the installation, and in a few cases attacking gay marriage. The â€œFuck Fagsâ€? comment had been scribbled over and a â€œFuck Christiansâ€? remark had been written nearby.

That afternoon, Diamondâ€™s class along with many outsiders met for the first time since the installation went up.

Diamond explained the project, and the five students who created it offered an apology.

Speaking for the five, who did not give their names, one of them said he knew the piece would be controversial. â€œThis project was not based on hate, fears, nor ignorance but instead we wanted to create a springboard for discussion,â€? he read. â€œWe did not anticipate just how inflammatory it would be nor the level of understanding between the comparisions of a man and an animal.â€?

For the next hour and a half, many people expressed their outrage at what they saw as ignorance from the students. Some feared that the piece would encourage intolerance, and even violence, toward people in the lesbian, gay, bisexual, and transgender community.

Others were angry that Diamond had not stepped in and stopped the students from erecting the installation.

â€œI guarantee you that they will walk away from this with a much more profound lesson than if I stood in front of them two months ago and said, â€˜You canâ€™t do this because youâ€™re going to hurt peopleâ€™s feelings,â€™â€? Diamond said in response.

And others were angry that the pain and hurt they felt was being held up as a â€œlearning experienceâ€? by Diamond.

Throughout the discussion, the students who created the project remained quiet even when people from the community asked them questions.

David Kilburn was one of the people who came to the class. New Times interviewed Kilburn last spring when he and his male partner tried to get a marriage license from the county and were turned down.

â€œWeâ€™re all advocates of free speech, but when does free speech become hate language?â€? Kilburn asked before class on Tuesday.

If the students and teacherâ€™s intent was to create dialogue about gay marriage, he said, they failed to do it in a constructive way.

â€œAt an educational institution, they werenâ€™t really capturing that teachable moment. It only inflamed emotions and left people to do whatever with it.â€?

The installation was scheduled to be taken down on Wednesday at the end of its allotted time. Â³