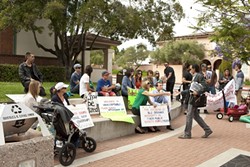 In a move that shocked many locals, the city of San Luis Obispo has reinstated a firefighter who remains in legal hot water.

John Ryan Mason, a 10-year veteran of the fire department, was terminated in November following a lengthy criminal trial for his role in an off-duty fight in a SLO bar and grill restroom that left another man with a broken jaw, nose, cheekbones, and multiple facial fractures.

Mason, who fled the scene prior to authorities arriving—leaving Jory Brigham unconscious and bleeding on the bathroom floor—avoided conviction when jurors failed to reach an agreement and the judge declared a mistrial.

Despite the outcome, Mason was terminated roughly a month later. Prior to his termination, he was employed as a fire engineer, earning $82,940 a year, as well as an incentive as a paramedic, which earned him an additional $9,200 per year.

Under the terms of his demotion, he’ll take a pay cut of about 40 percent, now earning $56,160 annually in his new job as a first-level firefighter. The new title comes without a paramedic incentive.

Angry residents are keying in on new, unusual disciplinary rules imposed on Mason. According to the terms of his agreement, he waives all legal and administrative rights against the city. He’ll remain on administrative probation for five years, during which time he can be terminated for any negative conduct on- or off-duty, without the right to an appeal.

Mason also waived his right to confidentiality with regard to his personnel file should he be terminated, City Attorney Christine Dietrick wrote in an e-mail to New Times.

The decision to reinstate Mason came following “hours” of negotiation before an impartial hearing officer, Dietrick said, and was at the discretion of Fire Department Chief Charlie Hines, the department’s appointing authority. It was also subject to concurrence with City Manager Katie Lichtig.

According to the city’s rules for dealing with a significant public safety employee’s disciplinary matters, an employee may immediately appeal a termination—as Mason did—which sets off a long process that can involve a third-party hearing officer, who can make a recommendation to uphold or reject the termination. Such a recommendation is only advisory to the city. The city council would then weigh in, and should the terminated employee choose, he or she can take the matter to court.

Dietrick said that at the outset of Mason’s hearing, the hearing officer engaged both parties, encouraging a settlement in order to avoid the uncertainties involved with the arduous administrative and potential court process. Other factors weighed, she added, were Mason’s admission of responsibility for his “serious misconduct,” the significant level of discipline he agreed to, and “the ability to return a highly qualified firefighter with an excellent prior work history to service for the community, while maintaining a very stringent level of oversight and accountability for his performance and conduct, both on and off duty.”

“The chief had a very difficult decision before him, one of the most difficult I have ever had to advise on,” Dietrick wrote. “We are hopeful that this decision is one that will allow the department, the city, the community, and Ryan Mason to move forward in a productive and positive way.”

Just days prior to Mason’s reinstatement, Brigham filed a long-expected civil lawsuit against Mason, his wife, and the owners of Pappy McGregor’s Bar & Grill, where the incident occurred. In the suit, Brigham’s SLO-based attorney, Greg Coates, alleges that Mason intentionally battered Brigham, that Mason’s wife knew of Mason’s “dangerous propensities” and failed to prevent the attack, and that the owners of the bar are also generally liable.

A case management conference is scheduled for Oct. 3 in SLO County Superior Court. As of press time, no response had been filed by Mason’s attorney.

On June 10, following his reinstatement, about 20 of Brigham’s friends and other outraged residents gathered for a silent protest outside City Hall, ahead of a special council budgetary meeting.

Protest organizer Lealah Broyles told New Times that the group strongly disagreed with the decision, and given that Mason—sworn to protect human life—admittedly violated the department’s code of ethics, the city should have taken a stand, regardless of legal uncertainties.

As a New Times reporter spoke with Broyles, a young man with a skateboard under his arm shouted “Fuck Ryan Mason!” as he passed by the group, heading toward the bus stop.