The crowd in Mission Plaza was crammed shoulder to shoulder. The tightly packed mass of bodies was difficult for 70-year-old Albert Gonzales to navigate, but he did so nonetheless, finding a space to hold up a homemade cardboard sign that read, "We are Heather," in large blocky letters. 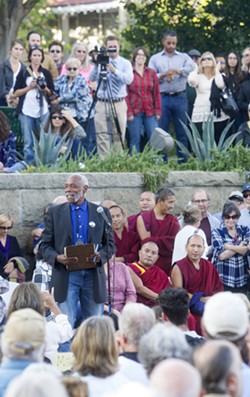 "It's time to come out and start doing something against this racism and bigotry," he said. "This is a hatred that needs to be stopped."

Gonzales, a Cambria resident and Vietnam veteran, was one of nearly 1,000 individuals who attended an Aug. 16 vigil for Heather Heyer and other victims of violent attacks by white nationalists and white supremacists in Charlottesville, Virginia.

Heyer, 32, was killed when a man drove his vehicle into a crowd of people who'd come to counterprotest a "Unite the Right" rally, an event organized and attended by white nationalists to protest the removal of a statue of Confederate Gen. Robert E. Lee. The day was marked by further violence as the rally-goers clashed with counterprotesters.

Heyer's death sparked national outrage and highlighted growing concerns with the rise and visibility of far-right racist groups since the election of President Donald Trump. After the events in Charlottesville, Gonzales said he felt compelled to come out to the vigil, organized by the Democrats of San Luis Obispo club and Women's March SLO organization, to show his support. 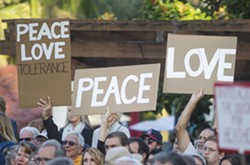 "Because I can't just sit down and let this go," Gonzalez said. "I consider Heather in the ranks of the brothers I lost in Vietnam. ... I consider her a fallen patriot."

While the events in Charlottesville were a wake-up call for many white Americans, the hatred, bigotry, and violence on display was likely all too familiar to the country's black citizens and other minority groups, who have long been the target of racism, discrimination, and violence.

"As many of you absorb the shock, to many of us, this is not a surprise," Courtney Haile, from the nonprofit RACE Matters SLO, told the crowd.

Haile, who was one of several speakers at the vigil, described racism and white supremacy as a spectrum that included the openly hateful and violent ideology of groups like the Ku Klux Klan and others, and also the more subtle institutionalized racism perpetuated through everyday interactions. 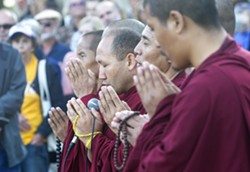 "I need you to open your eyes to the ways that racism—the insidious and specific disease of American racism—creeps into your lives and your thoughts," she said. "We need you to recognize and repudiate racism, anti-Semitism, and all identity-based hatred before it reaches its most violent, torch-bearing forms."

For Rabbi Janice Mehring, the hate on display in Charlottesville was disturbingly familiar. In her remarks, Mehring alluded to the rise of Nazism in Germany, which eventually lead to the systemic killing of some 6 million European Jews during World War II.

"This new neo-Nazi is the same as the old Nazi. They spew out the same racist, xenophobic, anti-Semitic, vile rhetoric," said Mehring, a rabbi for the Congregation Ohr Tzafon in Atascadero. "We have seen this before, and we all know where this leads if we let it go unchecked."

Haile encouraged those moved to attended the vigil not to let the fight against racism and white supremacy slip down their list of priorities as the news cycle moved on from the events in Charlottesville and Heyer's death.

"As horrified and impassioned as we are in this moment, these headlines will fade and so will your outrage. ... They have taken off their hoods, and they are counting on you to put on your blinders," Haile said. "We need you to stay vigilant, for this fight is yours."

It's a fight that Gonzales appears to be ready for, and one that he believes will require the kind of solidarity displayed in the plaza that day.

"We are all Americans," he said. "We need to come together and work together to make this county into what it's supposed to be." Δ