Over the river and through the woods, find Hidden Kitchen tucked in Cambria's downtown

Photo By Beth Giuffre BLUE CORN ORIGINAL Gluten-free, organic, and local is what you'll always find at The Hidden Kitchen. From seven savory or sweet choices of blue corn waffles on the menu, the San Luis Sunrise (pictured) is probably the most popular, according to staff.

The specialties at the Hidden Kitchen in Cambria are the bioregional blue corn waffle and seasonal smoothies, but it is a gluten-free, community-welcoming café featuring all-organic, locally sourced fare. Hours are Friday to Monday, 8 a.m. to 2 p.m. Please check @hiddenkitchencalifornia on Instagram for updates. Hidden Kitchen is located at 2164 Center St., Cambria. (behind Robin's Restaurant) down the road about 50 feet on the right through a wooden fence. Follow the signs and don't give up—it's a hidden gem!

Want to know where the friendliest vibe is in Cambria? I'll tell you, but I may also need to draw you a map. The first time I visited the Hidden Kitchen, ironically I got lost. My navigation took me downtown, but I eventually circled back and followed the breadcrumbs ... turning behind Robin's Restaurant on Burton Drive to an alleyway. There it was, behind a funky Arts and Crafts style former art gallery—so deliciously Cambria.

My friend LeeAnn and I met at the elusive "you're almost there" sign and then walked down the quaint little side street, through a fence. A leprechaun and a fairy ushered us inside the secret celestial city, and we picked a communal table with morning sun, next to a table of neighborly ladies and their cordial doggy. This little guy cruised around the open-air patio nodding approval to everyone's version of coffee, smoothies, and blue corn waffles.

Every person who came in said good morning or hello. The sound system was winding out some soothing acoustic folk. I felt like I was in both a café and community center. Good vibes are contagious—it's a known fact.

LeeAnn, who lives at the beach, was saying this is how Cambria is opening up to youthful ideas: a simple menu concept and a really groovy community vibe. You will not see matchy-matchy at this café. It's an easy-peasy, counter-service type of place. Two chill café employees working register and range. A variety of pretty wooden and bistro tables, some rattan sofas with pillows and wooden stumps, stools and chairs of your choosing.

I was in awe of the macrame art everywhere: earrings, mobiles, hangings with rainbow colors. Macrame decorates most of my childhood memories, and ever since I took a Paso Robles library class to attempt a macrame keychain, I have intense appreciation for the impossible intricacies of the art.

"Are you going to buy it?" asked one patron, as her friend admired a macrame cork piece she placed on the table after ordering. "I'm not sure," said the friend, "but I love it."

Meanwhile a surfer/contractor-looking guy finished his plate of food and dutifully brought it up to the bus tub, saying to the young lady working the counter, "You know you're going to be famous, right?"

He was talking about those one-of-a-kind blue corn waffles.

The menu isn't all that complicated. You can choose between seven or so fully organic and gluten-free preparations, from the savory (and most popular) San Luis Sunrise with two free-range eggs, bacon ends, and avocado on top of a blue corn waffle drizzled with creamy, dreamy Hidden Kitchen sauce, to a sweet version, such as the Chorro Crunch blue corn waffle topped with organic almond butter, homemade almond pecan granola, fig jam, and maple syrup.

The gal at the counter knew LeeAnn ordered the Morro Melt with the melted Havarti cheese last time, and I thought that was really sweet. When the staff remembers you by your favorite foods, you know you're in a place with heart and soul.

"We really want to create a space that feels like a reminder of what's possible for how the world can be," said co-owner Amira Albonni, who talks about creating a culture of open-mindedness. "Hopefully, when you come here, you see all of the things we have in common."

It occurred to me that the power of sincere peaceful intention is alive and well at The Hidden Kitchen.

My San Luis Sunrise was enormously satisfying and packed with layers of salty fresh egg and avo, mixed with those earthy blue corn bites of waffle and mysterious Hidden Kitchen dressing. I picked from a stack of mismatched coffee cups and pumped out a cup of regular. Almond milk and creamers sit next to the simple two organic drip coffee choices: regular or decaf.

Though I love myself an espresso machine, I can appreciate having to make simple choices. I was told I can refill as much as I liked, and there's something warm and cozy in that homey gesture too. When you need more, you swing by the counter again and fill your mug, passing by some warm and friendly neighbors. You chat a little about the good life or whatever. You bite in and breathe as you start the day.

On the other side of the menu are the 100 percent organic, gluten-free and vegan smoothies. Of the five delicious choices, I went for the Islay Immunity: banana, pineapple, OJ, ginger, and turmeric in a Mason jar, drizzled with bee pollen. Tangy and tropical, it was the most refreshing part of my morning.

Other than the smoothies and the waffles, the menu has some Whalebird Kombucha and a pretty display of organic Art of Tea.

The owners cook their signature waffles with a blue corn strain that has been growing on the West Coast as "one of the original grains available to humankind." They limit plastic use, and to-go orders are sent home in all compostable and paper products. They recycle their water for the onsite plants. Food waste is composted and sent to a farm less than 2 miles away.

The two gals behind Hidden Kitchen are Albonni and Amanecer Eizner. Eizner grew up in Big Sur, cooking at an early age. She discovered a blue corn waffle on a trip to Sayulita, Mexico, and left for her home on the Central Coast with 15 pounds of blue corn masa in her suitcase. She was determined to re-create that perfect blue corn waffle.

"We really just experimented to see which waffle would be the best. That is how we settled on our waffle recipe we have now, and then from there it was just about having fun with toppings," she said.

"The blue corn packs a lot more nutrients," co-owner Eizner said of the ancient local grain. "It also brings a lot more fullness to the waffle than, perhaps, your regular milled corn would." 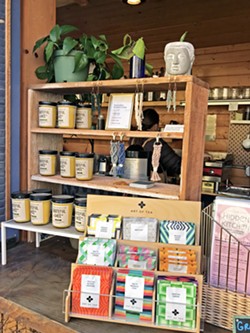 Eizner said, "Another benefit of blue corn is that it takes a really long time to grow, that's part of why it holds so many nutrients ... it doesn't do to the soil what a mono-crop GMO would do."

Hidden Kitchen closes in the wintertime due its to being an outdoor café, but the weather has warmed again so they re-opened on Jan. 10. The place is loved by visitors and locals alike, and that is the intention. Sourcing local ingredients and buying organic is high in cost, and that vision has held the Hidden Kitchen to a high standard of quality.

"It's not easy purchasing all organic," Albonni said. "But it's something we're definitely committed to."

Albonni is the owner and creator of grass-fed Grateful Ghee, which you can find for sale at the counter, next to the macrame earring rack. She grew up in the restaurant business—her parents owned a Mediterranean health food restaurant called The Healthy Gourmet in Orange County. She spent a childhood at the family restaurant and lending a hand in the kitchen with her Syrian grandparents.

It was on her search for a kitchen that led her to the space that's now the Hidden Kitchen in Cambria. Albonni and Eizner were friends before they became business partners. Both had been housemates and met one another working makers markets. Eizner sold African mud-cloth clothing and Albonni was selling her ghee.

In March, Albonni and Eizner will be opening up a second location. The (new) Hidden Kitchen in Cayucos will be located at the old Skippers spot on Ocean. Same name. Same mantra, but a new hidden location to find organic blue waffle and smoothie goodness amid community love. Δ

Flavor writer Beth Giuffre loves the thrill of hunting for a good restaurant. Send recommendations and treasure maps to bgiuffre@newtimesslo.com.