Julius Avery (Son of a Gun) directs this action/mystery/horror story about two World War II-era American paratroopers—Boyce (Jovan Adepo) and Ford (Wyatt Russell)—who are dropped behind enemy lines on D-Day eve to complete an operation essential to the invasion's success, but as they approach their target, they discover a Nazi experiment that creates powerful zombie soldiers. (109 min.) 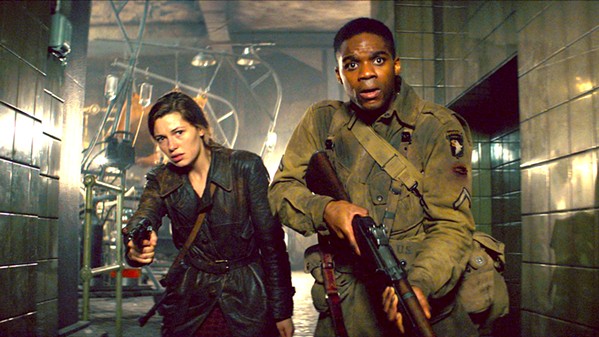 Glen This film's premise sounds like a recipe for cinematic disaster. The Nazi/zombie genre is a well-worn path of mediocrity, from Dead Snow to Outpost to Zombie Lake (or Le Lac Des Morts Vivants in French). But Overlord does something different—it tells a cracking good war story that just happens to run into some zombies. It's D-Day eve, and a squad of paratroopers is on a mission to take out a German radio tower in Nazi-occupied France. It's a harrowing flight, and the aircraft is mercilessly strafed. Looking out of the plane to the armada of warships heading to the beaches, seeing other planes shot out of the sky—it's all very effective filmmaking, but when we follow Boyce out of the damaged plane as he's hurling through the air, tracer bullets whizzing by and explosions filling the sky, it's amazing and terrifying. It's a great opening set piece! When Boyce is finally on the ground, it appears as if only he and Ford made the landing. Dead paratroopers hang from the trees like grim Christmas ornaments. Eventually they reconnoiter with two other soldiers—cranky Italian-American Tibbet (John Magaro) and soft-spoken photographer Chase (Iain De Caestecker)—and then happen upon Chloe (Mathilde Ollivier), a young French woman who agrees to guide them to the village so they can complete their mission. It's straightforward World War II action, but slowly the Americans see there's something more afoot. They find a weirdly shaped dog carcass, and Chloe's aunt is making strange noises behind a closed bedroom door. This being a war film, there's also Chloe's adorable kid brother, Paul (Gianny Toufer), who takes a liking to Tibbet. We meet the story's chief antagonist SS Hauptsturmführer Cpt. Wafner (Johan Philip "Pilou" Asbæk), who stops by Chloe's to rape her ... again. Nazis! So easy to hate!

Anna Indeed they are, and Wafner is especially hateable along with Dr. Schmidt (Erich Redman), who has concocted the strange potion they're injecting the imprisoned villagers with. The motley crew of surviving soldiers is forced to trust and lean on each other despite hardly knowing one another. Ford is an especially brooding character, commanding and mysterious as the crew's head honcho. The filmmakers did this one right—Overlord manages to stay both campy and exciting, a genuine feast for the eyes till the very end. It's funny and harrowing and pretty gross sometimes, keeps your heart pumping in that wonderful edge-of-your-seat way only movies can accomplish. It's got bad guys that are so genuinely easy to hate, a group of reluctant heroes, a beautiful and fierce French woman, a cute little kid, and plenty of explosions along the way. I for one had a lot of fun watching this one. The dynamics of the cast play well off of each other, and Tibbet's mouthy attitude yet reluctant attachment toward little Paul is especially endearing. It's a great blend of war story with a supernatural twist, enough gore to make you squirm, and an epic ending. There's no reason not to catch this one on the big screen—it's a blast and a half.

Glen Instead of making a bunch of cookie-cutter characters to act as cannon fodder for the Nazis, you really get to know these guys. Boyce catches a lot of guff from Tibbet because he's too sweet natured. Will he be able to kill when the time comes? We get to find out! Ford has already seen a lot of action, and he's jaded, but he and Boyce are focused on the mission even though it seems impossible. Naturally, young Paul becomes imperiled, and the American soldiers are torn between completing their essential mission and saving Paul and destroying the Nazi laboratory and its evil experiments. If they don't take out the tower, the D-Day landing will be a disaster, opening up their fellow soldiers to a bloodbath. It's all pretty harrowing stuff, and by the end, Boyce finds out what he's made of. It's got all the earmarks of a terrific war film with the added bonus of being a well-made zombie flick. As I noted earlier, these types of Nazi/zombie mash-ups have yielded pretty silly results. Overlord, however, is revisionist history at its finest. The U.S. Army was segregated in World War II, but the film doesn't make a big deal of its mixed race casting. Think of it as a B-movie version of Saving Private Ryan with some excellent gore effects. This is the film I didn't know I needed. Loved it!

Anna The doctor's macabre creations lurk in the underground lab, and there's more going on than just creating super soldiers, which becomes clear when Boyce inadvertently finds himself in the bowels of the church after hiding out in the back of a truck stuffed with dead soldiers. Heads and spines with no bodies, disfigured humans seemingly morphing inside huge suspended bladders high in the air—it's weird stuff! After overpowering Wafner, Ford starts a cycle of interrogation and beatings, which while brutal do little to the get Wafner to reveal what's really going on in that fortress. Soon enough they learn the true power of the serum the Nazis have concocted, and the gravity of what could happen if either side had access to the formula sinks in for our heroes. It becomes clear that their initial mission must be amended to include not just the tower, but the lab and all of its horrific contents. Every second they're in that lab, both wiring it up for a hopeful explosion and in search of Paul, had me holding my breath. This is one where I really wanted the good guys to win, come hell or high water. It's a bloodbath gore-fest Nazisploitation flick at its finest and an all-around great war movie with a delicious zombie twist. What's not to love? Δ