It’s a white van decorated with promotional phrases, and it’s parked in a place people don’t want it to sit.

“Liquor, Gas, Diesel, Lotto, Deli—one block” reads a billboard affixed to the roof of the vehicle, with an arrow pointing down San Gabriel Road toward El Camino Real in Atascadero. 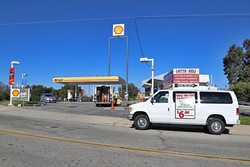 This unorthodox sign serves a useful function for Chalk Mountain Liquor & Deli, a store and gas station. Owner Michael Hawkins says it alerts unknowing travelers who exit Highway 101 about his “mom and pop” business just down the street.

“When you pull off the freeway, you don’t see me,” Hawkins told New Times.

Hawkins said the van does wonders for changing that.

“My tri-tip sandwich sales have doubled,” he said. “It’s incredible how many people that sign brings down.”

But the van-turned-billboard isn’t parked on Hawkins’ property. It’s parked a block away, in front of a neighboring Shell gas station.

Michelle Ford, manager of the Shell station, is tired of seeing that van. While she initially gave Hawkins her approval to park it there about six months ago, she soon changed her mind. Ford said she gets complaints about it from her customers and suspects it’s attracting business away from her.

But despite her expressed objections, the van hasn’t really moved. Instead, Hawkins is sparring with city officials over his signs and whether they violate municipal code.

Atascadero’s commercial sign laws prohibit all, “off-premises signs that direct attention to a business, service, or product not sold or offered on the premises on which the sign is located.”

“[The van] is not consistent with our code,” said Phil Dunsmore, Atascadero’s community development director. “It’s being parked in front of a competing business. It’s one of the basic principles for the reason that we have sign programs. It’s common courtesy.”

Chalk Mountain Liquor & Deli is one of many businesses Atascadero surveyed as part of a concerted effort to reduce commercial sign competition and clutter throughout the city. In their review of Hawkins’ business, they found multiple code violations that included billboards on and off his property.

The city wants Hawkins to redesign a billboard on his property to ensure structural safety. He contends that all his signs on-site are nearly 30 years old, and therefore exempt from compliance as they predate the ordinance’s adoption. He fundamentally disagrees with the city’s sign campaign, which he feels is anti-business.

“Part of business is generating sales,” Hawkins said. “I’m very frustrated with the city and their lack of promoting business and allowing us to promote business. I’m tired of seeing businesses shut down.”

Hawkins refuted the perception that the van was drawing business away from the Shell station.

“It’s not that I’m trying to take their business; I’m promoting what they don’t even have,” he said. “I’m in the food business. I’m just trying to get my little piece of the traffic that comes off of Highway 101.”

Hawkins said he’s been “targeted” and “sucker-punched” by the city. Originally, the vehicle parked outside the Shell station was a truck. According to Hawkins, City Planner Alfredo Castillo told him the sign was illegal because it had to be affixed to the vehicle. In response, Hawkins purchased a van with his signs securely attached, which hasn’t satisfied city officials. With tensions escalating, Hawkins filed a lawsuit against Atascadero on Dec. 31.

Hawkins is suing the city for withholding public documents, after it denied him records of complaints submitted against Chalk Mountain Liquor & Deli and emails between city employees mentioning his business. In response to Hawkins’ public records request, Atascadero cited Section 6254(f), which exempts governments from disclosing information related to ongoing investigations.

Hawkins hasn’t been cited or fined for his signs and claims to not know what investigation is ongoing. He’s suspicious that emails are being circulated among city employees ridiculing him.

“I’ve been in Atascadero my whole life—30 years of business,” Hawkins said. “I’m not some fly-by-night guy who’s trying to cause a bunch of trouble. I believe I’ve been targeted. Why won’t they release the public records? I want to know what’s being said about me and my business.”

Dunsmore told New Times that by denying Hawkins the records, the city is protecting complaint submitters from the threat of retaliation.

“If every time somebody submitted a complaint we went ahead and gave their complaint to the person that’s violating the regulation, people would be afraid to submit complaints,” Dunsmore said. “So it’s city policy to not share complaints from other property owners. This is in the hands of our city legal staff now.”

In the meantime, Hawkins says he’s “not backing down” from the city.

“Until the city will sit down with me and talk with me and we can come to some type of agreement and solution together, I’m not going to lose all the business my van is bringing in,” he said.