According to the National Coalition Against Domestic Violence, about 228 domestic violence fatalities involved a gun this year, 10 million people a year are physically abused by an intimate partner, and 20,000 calls are placed a day to domestic violence hotlines. 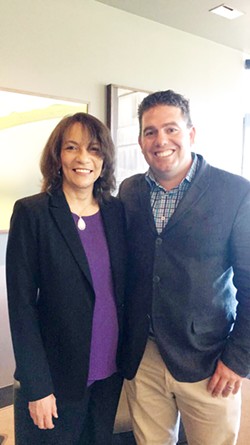 The National Coalition Against Domestic Violence is an organization that works to be the voice of victims and survivors of domestic violence. It does that by affecting public policy, increasing understanding of domestic violence's impacts, and providing programs and education to drive change.

President and CEO of the organization Ruth Glenn said those three key areas are an effective approach to catalyze change.

"Our main focus is truly on policy, whether it's housing or funding, we're ensuring that we're at the table making sure whatever it is does no further harm to domestic violence victims or enhances their safety," Glenn said.

Although the coalition is working on change and support for victims at a national level, Glenn said that the organization often doesn't get to hear or engage with organizations that provide services locally.

That's where Aaron Steed, a coalition board member and co-founder of San Luis Obispo-based Meathead Movers, comes in. On May 9, Steed organized a meet-and-greet between Glenn and local organizations that work against domestic violence. About nine domestic violence shelters from the Fresno and Los Angeles areas had representatives in attendance as well.

"My goal in putting this together was to try to help bridge the gap between our local shelter needs and national advocacy," Steed said.

Steed's moving business, which he started with his brother in 1997, has grown from its San Luis Obispo office to locations in Santa Barbara and Southern California. What came with its growth were many inquiries from victims looking to flee dangerous domestic violence situations.

Steed said the issue was one that came up early in the business's life.

"We'd get calls, and I'd be the guy picking up the phone. It was women looking to flee their abusive relationship, so we went there, helped them out, and did it for free," he said.

In 2001 Meathead Movers began its first official affiliation with a shelter, and since then it has partnered with an additional seven shelters across California to move victims of domestic violence for free.

The National Coalition Against Domestic Violence has a public policy office that collaborates with other organizations across the country to promote legislation and policies that serve victims.

"It's a program which offers cosmetic and reconstructive surgery via a network of doctors that provide their services pro bono to survivors. It can help with broken noses, broken eye sockets, and we even have a couple of dentists on board for broken teeth," she said.

Meathead Movers created the #MoveToEndDV movement that encourages businesses to help organizations in their communities to support victims of domestic violence. To learn more, visit movetoenddv.org.

Kennedy Club Fitness in Paso Robles hosts a water safety day of fun, food, and safety activities on May 19 from 10 a.m. to 2 p.m. in honor of National Water Safety Month. For more info, visit pasoroblesaquatics.com. Δ