# What happens when five Jewish gals mix comedy, music, spoken word, and burlesque? You get Nice Jewish Girls Gone Bad, which, according to the group's bio, is "the Borscht Belt reinvented, featuring the gals who learned to smoke at Hebrew School, got drunk at their Bat-Mitzvahs, and would rather have more schtuppa than the chupah."

The performers seen on Comedy Central, HBO, and MTV break down tradition with antics that would make Topol blush. You won't go home humming "If I Were a Rich Man," but who wants that stuck in their head?

Witness the spectacle on Saturday, Aug. 4, at 8 p.m. in SLO's Steynberg Gallery. Tickets are $15. Learn more about the troupe at www.myspace.com/nicejewishgirlsgonebad.

Inga by the Sea
As far as a stunning location for an intimate house concert goes, it's pretty hard to beat The Chapman House in Shell Beach. The dramatic home perched on a cliff above the Pacific Ocean is hosting a benefit concert for The Pacific Repertory Opera on Sunday, Aug. 5, at 2 p.m.

Featuring jazz vocalist Inga Swearingen accompanied by guitarist Jeff Miley, the concert will present jazz standards sung by one of the very best vocalists in the area. Swearingen won the 2003 Montreaux Jazz Festival vocal competition and has appeared on A Prairie Home Companion several times. In fact, Prairie host Garrison Keillor noted, "Inga has a gorgeous voice, very fresh and evocative and note-perfect."

Tickets are $45 each, or two for $85. Wine, cheese, and elegant desserts are included. To order tickets or get directions to the Chapman House, call PRO at 541-5369. You can also order online at www.propera.org.

What's cooking at the Mid-State Fair?

# There're still a few days left of the Mid-State Fair, and for my money (or lack thereof), the free stages are offering the best stuff. Take, for instance, Castaways Bar & Grill (located in Frontier Town), which is being run by Downtown Brew. They have some great local performers lined up, including AFRO playing on Thursday, Aug. 2 one of my favorite local acts, Threes & Nines, performing on Friday, Aug. 3 funkmasters Siko playing on Saturday, Aug. 4 and finally progressive, folk, and classic rocker Dusty Rhodes on Sunday, Aug. 5. All shows run from 9:30 to 11:30 p.m., are all ages, and are completely free.

I'm also kind of excited about one of my favorite '80s girl bands, The Bangles, who have reformed with all of the original members and are set to release a live concert DVD, Return to Bangleonia, on Aug. 14. The DVD, like their Thursday, Aug. 2, concerts at 6:30 and 8:30 p.m. on the free Budweiser Fort Frontier Stage, features hits such as "Walk Like An Egyptian," "Eternal Flame," "Hero Takes a Fall," and "Get the Girl," a song that resurfaced in Austin Powers: The Spy Who Shagged Me.

Get the whole fair entertainment listing at www.midstatefair.com.

More music
The Martin Paris Band, featuring stellar guitarist Martin Paris, performs on Friday, Aug. 3, from 5:30 to 7:30 p.m. at the Paso Robles City Park Bandstand, for the next installment of the Concerts in the Park series. The concert's free and hors d'oeuvres, J. Lohr wine, beer, water, and soda pop will also be available for sale.

# Travis-style picker Don Lampson will perform his original songs and assorted "Okie music" at The Porch in Santa Margarita on Friday, Aug. 3, from 7:30 to 9:30 p.m. The lucky 100th patron to arrive will receive a free copy of Lampson's CD Years & Miles. Call 438-3376 for more info and directions.

Steve & Elizabeth will perform their own brand of Americana music at Last Stage West on Friday, Aug. 3, beginning at 6 p.m. Reservations are recommended.

The Dentures Bob Kimball, Steve Conrad, Bill Donley, and Ron Saul will bring their ripping surf rock to Los Osos' Red Barn Community Music Series on Saturday, Aug. 4, at 7 p.m. (There's a 6 p.m. potluck and open jam at 6 a $10 donation is requested). The band will be performing an unplugged "Surf Stomp," and guests are asked to dress for the "Best '60s Costume" contest. Cowabunga, man.

The Whiskey Hill Blues Band, founded more than seven years ago by four young men obsessed with blues and soul music, plays the Frog and Peach on Saturday, Aug. 4, at 10 p.m. Today the group boasts nine members with a full horn section. The group plays covers by the likes of Muddy Waters, Wilson Pickett, Stevie Wonder, B.B. King, Al Green, and James Brown, but has also penned some original material. Hear some tunes at myspace.com/thewhiskeyhillbluesband. 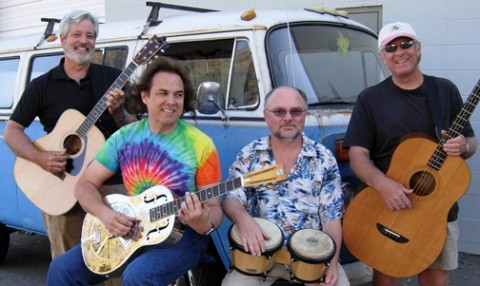 # The dance continues at The woO! on Sunday, Aug. 5, from 10 a.m. to noon, when DJ C7 spins ethereal soundscape magic, creating a playful adventure in movement and dance, at SLO's Monday Club. Get your dance on, freaks!

On Sunday, Aug. 5, at 3 p.m., "The Festival of the Bells" returns to the SLO Mission to present a visual and musical celebration of the Native American and Hispano-American heritage of this region, featuring the ringing of the five new bells at Mission San Luis Obispo de Tolosa and performances by The New World Baroque Orchestra. This year's event features several new selections of Early Spanish music, as well as that of Early Russian California, exploring the little-known history of the collaboration and exchanges using Latin as a common language between the Russian Orthodox priests and the Franciscan padres documented at four of the missions in Northern California. Tickets are $10 (children younger than 12 get in free).

Finally, mark your calendars for the return of Devon Allman's Honeytribe, coming to Downtown Brew on Thursday, Aug. 9 (Doors are at 7 p.m. Axia opens at 7:30 p.m. Tickets are $17 at Boo Boo's).

Glen Starkey is back from his vacation sunburned, exhausted, and unready. Send him your vacation pictures at gstarkey@newtimesslo.com.