Shareholders of the large, Southern California-based Pacific Premier Bancorp voted to approve the acquisition of Heritage Oaks Bancorp, a well-known Central Coast banking chain based out of Paso Robles.

Pacific Premier announced approval of the acquisition on March 28. According to filings with the federal Securities and Exchange Commission (SEC), the deal, which was first announced in December 2016, is valued at $405.6 million. 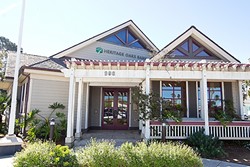 “We believe that these voting results are an affirmation of our belief that the combination of Pacific Premier and Heritage Oaks will create one of the most attractive commercial banks in California, with significant opportunities to enhance the banking experience for our customers and drive increased value for our shareholders,” Steven R. Gardner, chairman, president, and CEO of Pacific Premier Bancorp, said in a written statement issued after the vote.

Shareholders approved that deal despite a lawsuit that attempted to halt the merger.

The lawsuit, filed by Heritage Oaks shareholder Robert Garfield in February, accused Heritage Oaks’ president and board members of negotiating a sale that undervalued the company’s stock in exchange for terms that would benefit them personally. The lawsuit claims that Hertiage Oaks CEO Simone F. Lagomarsino, who will be retained as part of the surviving company after the acquisition, was allowed to “dominate and control” the sales process. Lagomarsino, along with Heritage Oaks board members Michael Pfau and Michael Morris, will be appointed to Pacific Premier’s board of directors after the merger, according to SEC filings.

“These conflicts of interest caused [Heritage Oaks] directors to be unable to fairly and thoroughly evaluate the sales agreement to ensure that it is in the best interests of [Heritage Oaks] and its shareholders,” stated the lawsuit, which was filed on Garfield’s behalf by the Beverly Hills-based law firm of Brodsky & Smith.

Lawyers for Pacific Premier, also named as defendant in the lawsuit, filed a response disputing Garfield’s claims, and stating the merge confers “enormous benefits” on Heritage Oaks shareholders. Their response said that the suit was a “cookie cutter” example of similar attorney-driven suits commonly filed against stock mergers. Such lawsuits have plagued corporate transactions in United States for the last decade, according to the response, and Garfield’s case amounted to “corporate extortion.”

“The ‘strike suits’ … are purposefully timed to exert maximum pressure on defendants to settle rather than to protect shareholders,” Premier’s response stated.

The lawsuit is ongoing in SLO County Superior Court, but did not stop the March 27 vote on the merger. According to a statement from Pacific Premier, the acquisition transition is expected to be effective April 1. Pacific Premiere currently operates 15 full-service branches in California and has $4 billion in assets.