Paddle on: Get out on the Elkhorn Slough and don't worry about sharks

My parents are in a two-person sit-on-top kayak, quickly putting space between their bright yellow barge and mine, which is being paddled solo. Aside from already feeling incompetent—because I'm too competitive and should obviously be able to keep up with my parents, even though it's two versus one—I'm pretty much in heaven.

Smoke stacks soar above the water, disturbing the blue sky with a couple of gray streaks. A light wind helps us along, and we glide beneath the Highway 1 bridge and out of the harbor in Moss Landing. 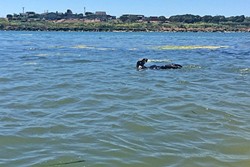 It's Father's Day weekend and this is my gift to him, well, a gift to myself, too, actually. A Sunday morning spent paddling around the salty-fresh body of water in kayaks, viewing seals, pelicans, cormorants, sea otters, and dozens of other creatures I can't name. And I'm not worried about sharks, which I am definitely afraid of—which is also why I don't know how to surf, either, even though I spent several of my adult years living within walking distance of the Pacific Ocean.

Alongside old wooden pilings, a flock of white pelicans is lounging, cackling, and moving like birds do along the soft, muddy shoreline. My dad thinks those eggshell-colored pelicans are the coolest part about this trip. I'm a fan of the otters; they're so close I can make out the whiskers on their faces. My mom is a fan of the experience, period.

We rented our rides from Monterey Bay Kayaks, $35 per single kayak for the day, got a quick little safety lesson, and were sent on our way. It's 4 miles up the slough to a place called Kirby Park, which is the only spot you can legally step foot onto dry land because it's protected as a National Estuarine Research Reserve.

About 2 1/2 miles in, we start to head back. It took 30 to 40 minutes to make it this far and the wind's starting to pick up. The safety lady warned us about the breeze, and I feel like I'm pedaling a bike into the wind with my arms. It's like hitting a wall every time you stop to gawk, and I stop a lot. But I'm definitely not the only wildlife tourist.

It's a traffic jam: kayakers, paddle boarders, and people actually pedaling on top of giant boat-bicycles are all just lollygagging along. I start to panic a little, because it feels like they're closing in on me—if they're anything like me (newb!), avoiding an accident won't be second nature, and nobody is paying attention to anything!

Have you ever tipped a kayak? It's cold, wet, and dark. I've done it once in my life and it was a battle between my noggin and some river rocks. And it was so cold. That hyperventilation feeling I had back then was kicking into gear inside of me, so I got the hell out of there. Away from the shoreline, the pelicans, the seals, and straight into an algal bloom of epic proportions.

It's like paddling through cream of spinach soup. But I'm all alone. Just me, a half-eaten crab floating on grass, and an otter chilling on its back. This definitely doesn't suck.

It takes us 1 1/2 hours to get back, and although I won't admit it to my parents, my arms are sore and my butt is cramping. And I sunburned the tops of my legs for the first time in my life. Sunscreen, people! That's on the to-do list for next time.

Editor Camillia Lanham believes aloe vera is the spice of life at clanham@newtimesslo.com.