The Bruce Everett: A Change of Scenery art exhibit will be on display at the SLO Museum of Art through May 12. Visit sloma.org for more information.

The painting surrounds you. Or at least, that's what it feels like.

"I'm drawn to large scale," explained Templeton-based artist Bruce Everett, "because of the added impact of the image, but also the idea that the viewer can enter the painting more easily."

At 85-by-127 inches, the oil-on-canvas Sand Canyon Road commands your immediate attention when you walk into the San Luis Obispo Museum of Art, where it's hanging at the moment.

Everett's art is currently on display at the museum as part of the Bruce Everett: A Change of Scenery exhibit. The show provides viewers with a unique opportunity to experience Everett's artistic journey by bringing together important paintings from his earlier career all the way to the present day. Although this exhibition is not a retrospective per se, it does include more than 40 years of his artwork.

Sand Canyon Road, in particular, is inspired by Everett's wanderings through the San Gabriel Mountains near Burbank. The larger-scale piece took more than three years to complete. The painting is striking and makes you feel as though you just turned around the bend on a mountain road and stumbled onto the most marvelous vista.

"I used to willfully become lost on mountain roads, and I'd have my camera with me," Everett said. "I came around this corner late in the afternoon, and it knocked me out. There was this strange feeling of wanting to go around the corner, but also danger."

Everett describes himself as a painterly realist, but acknowledges that others consider his work to be more photographic in nature. Another of his pieces, Whale Rock Reservoir, shows a view right above Cayucos, and it was the first painting of a local spot that Everett attempted after relocating to the Central Coast some 12 years ago. At 40-by-60 inches, the painting features shimmering blue waters peeking out from cascading green hills. 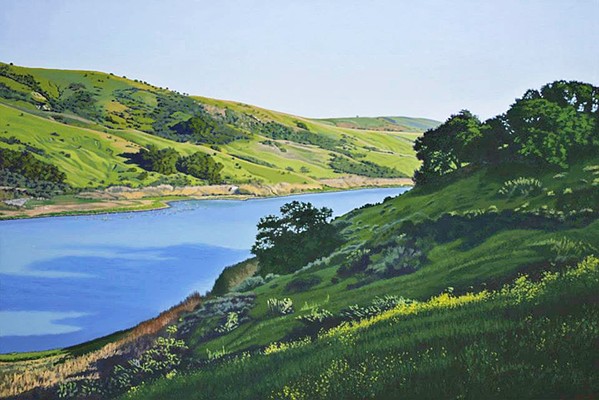 Whether painting in studio or en plein air, Everett looks to capture beauty that already is.

"That experience of seeing something almost sublime, where there's some drama with strong light and shadows," Everett said about his approach. "I look for something that is there, rather than trying to contrive it."

Ultimately, Everett hopes his paintings inspire viewers to get out into nature and explore, to see some of these views for themselves in person.

"I love it when people say, 'I was out for a drive and this reminded me of one of your paintings,'" Everett said. "It makes them notice their surroundings more, having seen my art." Δ

Arts Writer Ryah Cooley is daydreaming. Contact her at rcooley@newtimesslo.com.