Six months ago, 29-year-old Isaac Wollman led a fairly normal life, by most standards. A talented artist who studied at the San Francisco Art Institute, Wollman spent his time painting, surfing, and taking courses at Allan Hancock College to become a counselor. That changed on Thanksgiving Day, when Wollman began coughing up blood and had difficulty breathing. He went to French Hospital and, after running some tests, they asked if he knew anything about kidney disease. He replied that he did not.

From believing that he was healthy, Wollman now spends four hours a day three days each week hooked up to a dialysis machine that makes him weak the remaining four days of the week.

“I knew there was a dialysis center downtown but you don’t care about that kind of stuff when you’re not there,” he said of the experience. “You get used to it after awhile. We didn’t know anything. We didn’t know if I would recover.”

In February, Wollman learned that his kidneys were not improving and a month later his parents, Michael and Linda, sent blood to be tested at Cedars-Sinai with the hopes that one of them would be able to donate a kidney to their son. If one of his parents is, in fact, a match, Wollman could have a new kidney as early as June. If not, the waiting list for a kidney is about eight years, unless another potential donor steps forward.

Though the artist finds it difficult to focus on painting, he’s having a rare local exhibit, May 7 to June 10 at ARTS Space Obispo in The Creamery. Titled “Kidney Daze,” the show will feature an estimated 25 paintings spanning the last eight years. Local painter Carol Paulsen instigated the show by bringing Wollman’s art to the attention of ARTS Obispo Executive Director Marta Peluso. Wollman estimates that it’s been about a decade since he last exhibited in SLO. His usual artistic haunts are considerably more urban and large-market, cities like Oakland, San Francisco and Sacramento.

Wollman’s paintings are small in scale, reflecting the spatial constraints he overcame to make them. His earliest paintings, dating back to 2002 or so, were completed in his small Oakland apartment. They’re abstractly anatomical, intestines or a pelvis, depicted brightly, almost primitively. His mom is a nurse midwife, so information about the body was always accessible. These images would also serve as a starting point for the painter’s later works. 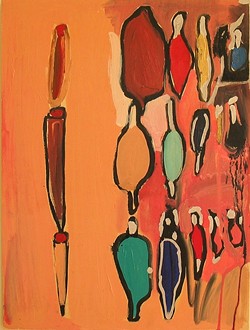 After beginning with individual organs, Wollman expanded to human relationships. One painting, his favorite, is covered in guns and hearts. In a collection of work that’s unabashedly abstract, with simple shapes representing complex organs and even solar systems, it’s a surprise to approach a painting and instantly recognize its subject. Still, the guns and hearts represent something greater: human relationships. Which Wollman sees as a kind of tug of war. Another, which rather resembles slabs of meat—festively colored red, turquoise, honey mustard, and peach, of course—strung across an invisible line is also a commentary on human relationships.

“It’s about how the people at the Art Institute were cliquey,” explained Wollman. “They always kind of dressed the same and talked the same.”

Is he at all offended that his cliquey people were mistaken for slabs of meat?

“I kind of like people getting their own interpretation,” he said. “I think more people like the shapes and the colors and the whimsical part than get what it’s about.” 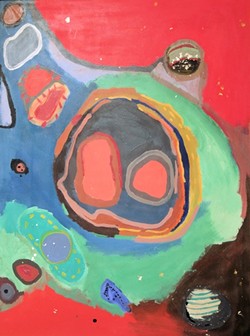 For the most part, Wollman is critical of the San Francisco Art Institute, citing a tendency to stamp out individualism. But he acknowledges that his training at the institute was valuable. While there, he learned to stretch canvases, a skill that was convenient but also important to his identity as an artist.

“You’re not really an artist, until you’re a craftsman,” he explained.

Then, Wollman struck upon a subject of such macro scale that an intestine looks like a nano-organ by comparison. Space. One painting, “Astral Planets DNA” expresses Wollman’s relationship with nature and his belief that everything is 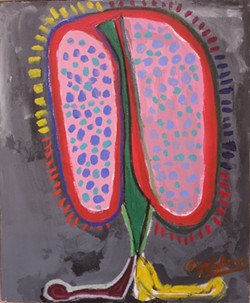 connected, from planets and moons that orbit one another in an incomparable dance to human DNA. His 2008 painting “Gravitational Pull/ Distortion” is the show’s centerpiece. His depiction of the solar system is riddled with imperfect circles and oblong shapes, a kind of map that looks as much like the view of micro matter through a microscope as a vast celestial structure. Wollman calls his paintings cosmic, organic, naturalistic, and ethereal, which might surprise people who expect the paintings to be soft pastels. His nature is more vibrant, primal.

Most recently, Wollman’s paintings have taken on a political edge. He has two paintings riddled with religious symbols and icons. The background of one painting is comprised of color blocks that Wollman intended to be a map of Golan Heights, a region of land contested between Syria and Israel. He was drawn to the irony of the situation, of people born and raised in the same territory fighting each other in a game of tit for tat with mortal consequence.

Though the paintings are directly related through a narrative or shared subject, according to Wollman they all explore “how we fit into the world, the minute scale and the grand scale of us as people.” It’s a difficult subject for someone recently forced to re-negotiate his own role in the world. But one that is perhaps all the more substantial because of Wollman’s recent kidney daze.

Arts Editor Ashley Schwellenbach finger paints with the best of them. Send primary colors to aschwellenbach@newtimesslo.com.