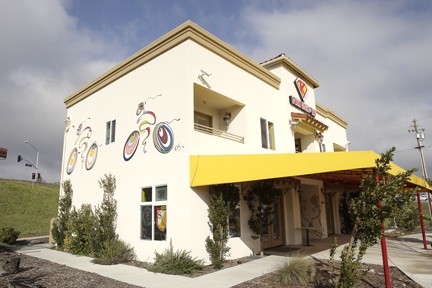 Is it a sign or a mural? Is art a sign? What is a mural? If you live in Atascadero, these are tough questions to answer—and for at least one business owner, the only answer is this: A mural costs $605.

Keith Schmidt’s attempt to gussy up a bare white wall on his K-Man Cycle and Run bike store kick-started some city bureaucracy and a $605 sign permit. But Schmidt doesn’t consider the painting to be a sign. Neither does Kathleen King, the artist who painted it.

“I’ve never—absolutely never—encountered this,” King said of the city’s policy toward murals. “In fact, usually municipalities are praising businesses that go … out of pocket to beautify city streets.”

Indeed, Atascadero has a signage policy in its codes but no definition of a mural in that policy. While applying for a permit to put up an awning, Schmidt—who was recently named business person of the year, he said—also asked about painting a mural. A city planner told him murals qualify as signs, which require a permit. Had Schmidt’s business been located a few blocks away within the city’s redevelopment area, the city would have waived the fees and there would have been state funds to help him pay for the painting. Schmidt thinks that’s a “double standard,” so he had the mural painted anyway and soon city officials were telling him he had a bill to pay.

A city letter arriving Jan. 11 informed Schmidt he had violated the sign ordinance, designed to “protect the economy and aesthetics of the community.” He was ordered to get a permit or face fines of $100 to $500 per day. Schmidt met with planning officials to try to work out another solution but was unsuccessful, he said.

Schmidt’s mural is a sign, as far as the code is concerned, explained Community Development Director Warren Frace. The city defines paintings on buildings as signs.

“It’s not that we’re trying to prevent these things from happening,” Frace said. “It’s just that we have a process.”

“For what I paid [King] to do that mural, I could’ve put up a butt-ugly sign,” Schmidt said.

He said he plans to pay the fee, but will lobby the city council to amend its ordinance.

“We didn’t play exactly by the rules,” he admitted, “but I still don’t agree with them.”