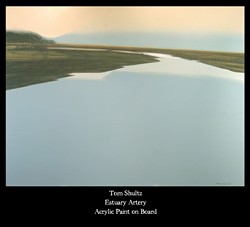 # Apple pie is dated and simple, and these days you're as likely to find someone who wants to spit on the American flag as salute it.

But the open road remains quintessentially American--a metaphor for freedom,interconn-ectedness, and all that lies ahead. Los Osos resident Tom Shultz has dedicated the past few years of his career to painting these concrete, metaphorical visions, not because he has anything against apple pie, but because he believes that roads are the country's real landscapes.

"How many people actually stop their cars, lock them up, and go backpacking?" he asked. "Very few."

One day, Shultz was painting one of his many classic cars, and a landscape emerged in the background.

"Then I started painting the landscape and leaving the cars out," Shultz explained.

Another artist might never have made that transition, but Shultz has been painting for 60 years and his faith in his ability to paint anything allows him to move on when a new subject captures his interest. In 1997, his paintings of classic cars were displayed in the Petersen Automotive Museum in Los Angeles.

In 1969, Shultz graduated from Mankato State University with a bachelor's degree in art, setting the stage for a lifelong pursuit of the craft. He considers drawing more significant than painting, and throughout his career has painted portraits, created sports-related paintings and murals, and painted cars and seascapes. His public relations representative, Paso Robles resident Rosa Lee Sonney, was initially drawn to the graphic edge in Shultz's work.

# His current exhibit--"Arteries of the West: New Work by Tom Shultz" at Paso Robles' FireFly Gallery--fails to hint at the graphic edge Shultz once employed in his work. Instead, his most recent paintings, from four years ago to late October of this year, mark a decided turn toward fine art.

Shultz's recent landscapes aren't plein air, but he doesn't allow them to enter the realms of fantasy, either. Instead, he tries to paint scenery that looks real, with the feel of a breeze blowing through the image. His colors are mostly muted grays, browns, and blues, but the abstract touches make them pop. Some look like blurred photographs or the view through a rainy windshield. Others are more abstract.

"It's important to know how to draw," Shultz said. "I think you can make abstract art if you can draw. Some of these paintings are starting to go abstract."

Estuary Artery was completed in October and, according to Sonney, it's Shultz's best piece. If the piece looks more minimalist than his others, it's because he literally removed paint he was dissatisfied with. Unlike the other paintings, this one doesn't feature a road--only an estuary, a different sort of artery. This subject matter may have been influenced by his visits to Mexico, where, he claims, many of the roads are dry creek beds. Whether this estuary marks the end of Shultz's road period is difficult to say. But his commitment to painting at the expense of all other pursuits ensures that, whatever the phase, his work will be well done. 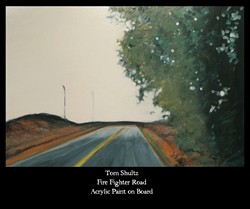 # According to Emily Miller, who owns FireFly Gallery with her mother, Laurel Miller, Shultz's exhibition is the third they've hosted since their upstairs gallery space opened in the summer. The downstairs store is filled with items that meld artistic sensibilities with colorful crafts: candles, jewelry, wall art, and furnishings. Compared to the decorative downstairs, the gallery is fresh and spacious, with low ceilings and the necessary wall space for larger pieces. The average art show at FireFly Gallery will last three months. Some of the artists will exhibit individually and others in groups, but every one will be selected for the owners' appreciation of the work. That's how Shultz found his roads winding their way through Paso Robles' newest breath-of-fresh-air art space.

"I just like his take on landscape," Emily Miller said. "The landscape painting is so big for the Central Coast, and he does it in a way that feels very fresh. It still has a dream quality to me. And he does it very well. You can tell he knows what he's doing."

"Arteries of the West: New Work by Tom Shultz" will be on display at Firefly Gallery in Paso Robles, 1301 Park St., through Jan. 19. For more information, visit www.thefireflygallery.com or call 237-9265.

Arts Editor Ashley Schwellenbach was a road in a former life. Send your reincarnation stories to aschwellenbach@newtimesslo.com.