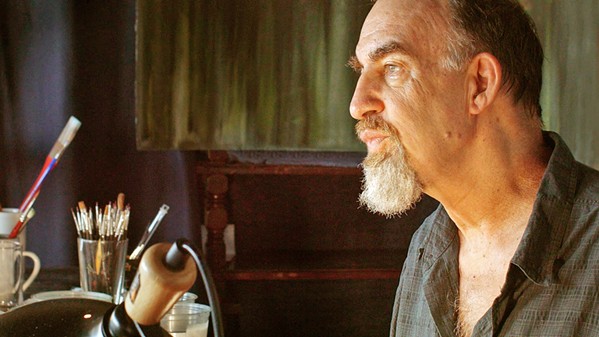 Think of HBO Max's quirky new series Painting with John as the anti-Bob Ross and his The Joy of Painting PBS series. In fact, in the opening episode, star John Lurie says, "Bob Ross was wrong. Everyone can't paint." The antithesis of Ross and his "happy little trees," Lurie declares his trees are angry. Deadpan funny, philosophical, and deeply odd, Painting with John is a trip into the mind of an iconoclastic artist.

Lurie, if you don't recognize the name, is co-founder of The Lounge Lizards, an acid jazz ensemble with which he played saxophone. He's also scored 20 films, and started acting in Jim Jarmusch films such as Stranger Than Paradise and Down by Law. Other notable films include Paris, Texas and The Last Temptation of Christ. Towering at 6-foot-4, with a deep rumbling voice, he's an imposing figure.

A self-taught artist working in watercolor and oil, he calls his paintings "a logical development from the ones that were taped to the refrigerator 50 years ago." In 1994, Lurie was struck by a baffling series of neurological symptoms, which turned out to be chronic Lyme disease, which made him unable to act or play music. His TV show is a mix of his philosophy, life lessons he's learned, and him accidentally crashing drones into his jungle-like backyard. Highly recommended! (six 20-min. episodes) Δ