It’s a tricky thing, trying to mimic something that you’re not.

A painting is by nature a moment frozen in time, forever stuck in its stillness. Yet, the illusionary art tricks that can give images lighting or depth can also conjure a sense of movement. 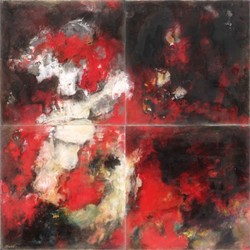 The San Luis Obispo Museum of Art in collaboration with The Painter’s Group is currently showing the Rhythm and Hues exhibition at the SLOMA’s gallery on Broad Street. Exhibition juror and Cal Poly art professor Tera Galanti combed through a mix of representational and abstract submitted works from local artists, picking the paintings that she felt most embodied the theme of the show.

“I was thinking mostly of compositional rhythm,” Galanti said. “I was looking for a sense of movement and a sense of cohesion with the color.”

Of the 30 paintings in the show, Galanti selected three works for an award of merit: Moving On by Ellen Jewett, Antelope Canyon by Sandy Heller, and 4 Alarm by Flo Bartell.

In Jewett’s Moving On, a figure of a woman against a black background is depicted. Jewett’s use of heavy, layered strokes makes the subject look as if she’s literally about to walk off the canvas.

“I was really impressed with the presence of the work,” Galanti said. “It had a mysterious quality and a sense of movement.”

Jewett, who is based in Los Osos, described her artistic style as a combination of the goddess, gothic, and the cross.

“I wanted it to exemplify a woman-like figure moving on, into the foreground, and off the page,” Jewett said. “If it doesn’t have that excitement and risk to it, I’m not happy with it.”

Heller employs a subtle yet impressive use of variation and shading for Antelope Canyon, creating a sense of slope, of shadows descending on the canyon.

“There was a really nice sense of unity with the colors and really specifically a good visual rhythm,” Galanti said.

Bartell, co-president of The Painter’s Group and the Los Osos artist behind 4 Alarm, said she painted the piece several years ago, after a period of time when she hadn’t been able to paint much. The piece is abstract, comprised of four canvasses, and makes dramatic use of bold splotches of red that feel like they’re engaged in a tug of war with the black and white colors in the piece.

“That’s where the red comes from, the passion or fire to get the painting done, and it’s in four pieces,” Bartell said.

Galanti said that 4 Alarm does a good job at creating a sense of space, of the red coming forward and the black pulling backward.

“This piece was just really strong in terms of the use of materials,” Galanti said. “There’s a lot of variation in color. The red of course stands out the most. It looked very intentional. It’s abstract, but intentional. The red really comes forward.”

Ryah Cooley has a different kind of rhythm at rcooley@newtimesslo.com.