A local artist searches for salvation

David Settino Scott is a compact man with a deep-lined face, shaggy graying hair, and imploring eyes. He's quick to laugh, but more frequently, when you catch a glimpse of him when he thinks no one's watching, he has a kind of impassive serenity, the sort of look you see on the faces of monks during meditation a kind of resignation that comes from accepting the world as it is: sad and glorious.

# He spends his days in a studio in San Miguel that he designed and built himself, a place with "all northern light," the kind that allows him to make paintings that can only be described as luminous. To be honest, photographs don't do the work justice, especially photographs printed on the flat drab of newsprint. The only way to see, to really see his work its translucent layers, its glowing surfaces is in person.

His current show on display at the Steynberg Gallery is matter-of-factly titled "New Figure Paintings," a title that does little to communicate the deeper meaning behind many of the paintings, which depict beautiful, nude women bleeding from small, self-inflicted cuts. The technical name for this affliction is "Deliberate Self-Harm Syndrome," and 2 to 3 million Americans are thought to engage in this sort of self-injury. Most so-called "cutters" are women, ages 13 to 30, and their self-mutilation is thought to be triggered by stress or trauma. Some may remember that Princess Diana was an admitted cutter, demonstrating that the affliction knows no social bounds.

"I mentioned this show to a friend of mine, a former psychiatric technician who used to work with troubled teens, and she told me a story about a girl who came in to see her, and her legs were like hamburger," Scott recalled. "Well, they sewed her up, but she kept coming back, sometimes with minor injuries, sometimes with worse ones. She finally did herself in by throwing herself off a parking garage. She landed on a Dumpster." 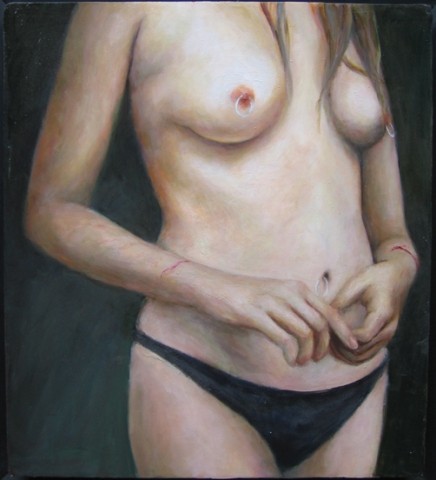 # According to psychologists, most cutters aren't suicidal. Instead, during their formative years, they didn't develop positive ways of coping with stress. For Scott, his series of works depicting these female self-mutilators is an allegory for all kinds of self-inflicted abuse.

"These works are a metaphor for abusing a perfectly good body, a gift from God. Because of psychological damage, people become self-destructive, behavior that can be disguised as accidents, manifested in acts such as driving too fast, drinking too much, taking drugs, anorexia and bulimia, excessive tattooing and body piercing. I just happened to pick one kind of behavior. I felt like I didn't need to beat the idea to death or make it too literal."

Scott never rushes to answer a question, instead frequently closing his eyes as if looking inward for answers. He's essentially a visual artist with a philosopher's heart, and it's that heart that comes through in all of his work. Not too long ago, he did a series of sculptures depicting self-immolating monks. He also did a series of paintings that depicted war atrocities set among suburban tract homes and bucolic fields. This current series is another step in a long line of socially conscious visual art work, and, like a good philosopher, Scott believes he's found the source of the problem he's depicting: "It stems from people not being aware and mindful of their presence in the moment."

For Scott, life is a gift to be enjoyed, not taken for granted and abused. It's how he lives his life passionately, surrounding himself with beauty, friends, and experiences. His work hovers between his optimism and what he sees as others' pessimism. 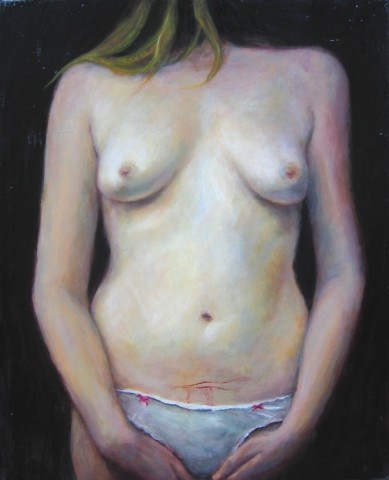 # From afar, his new works look like gorgeous nudes. It's not until you're up close that you see the cut, the trickle of blood. If he's depicting a dark subject, why make them so beautiful?

"You want to attract people to the paintings, so you make them the most beautiful painting you can, and once you suck people in, you give them the message. You don't show an arm being ripped off from across the room. I think it's a crime for art to be obvious."

Because of the subject matter, these paintings' commercial appeal may be diminished. Does that matter to Scott?

"Because they take me so long to make and they're worth it. And they're really not expensive by L.A. standards."

Scott's work has long been shown in Los Angeles, and among his collectors are Anthony Hopkins, Ted Danson, Whoopi Goldberg, and Ed Harris. He knows his chances of selling his work locally are slim, and he said as much to gallery owner Peter Steynberg.

# Even though not everyone might want to live with these images, Scott believes they represent all of us: "We all struggle with our addictions. Everyone has some form of addiction because we've all been damaged in some way and struggle with that. The key is to find the divine within ourselves. It's not out there," he said, gesturing outward, "but in here," he said, touching his chest. "When we do, we have the full experiential joy on earth. Finding the divine within is our salvation salve for our wounds."

Scott's lived many lives. He's a pilot and used to teach flying. He worked for years in Hollywood, doing visual effects on movies as diverse as the original Star Wars and the comedy classic Caddyshack. He's a motorcycle enthusiast with a passion for vintage Italian bikes. But his vocation, his mission, is painting, and judging from this new collection, it's the calling he was meant for.

Glen Starkey found the divine but has misplaced his mojo. If found, please contact him at gstarkey@newtimesslo.com.