Fight for your right ... to have your spirit animal win!

It’s Friday, Aug. 2, and as I walk into the Steynberg Gallery, there’s a melee going on! Arms are flailing, people are being pushed into walls, and some are grabbing others and trying to twist them into submission. Meanwhile, people are standing around watching the chaos … with drinks in hand! Oh, the humanity!

On the walls are large sheets of paper with two animals drawn on them, each moving head first toward the center, where two artists fight to finish their visions. It’s Collaborative Combative Drawing, and it’s the brainchild of Melissa Wyman, an artist and self-defense trainer who took her two passions and combined them into something truly weird but awesomely entertaining to watch.

After a couple more minutes of fighting and drawing, a whistle sounds, signaling that the two artists must stop fighting and begin to collaborate again.

Let me backtrack for a minute. The artists involved—14 in all, including Wyman—began this exercise in creativity much earlier in the day, when Wyman began training them in some basic martial arts techniques drawn from Aikido and Japanese and Brazilian Jiu-Jitsu. Then she directed them to spend time making their drawings from their respective sides of the paper toward the center. As people arrived for Art After Dark, she facilitated a series of three-minute “fights” where the artists used their new martial arts training to block their partner’s attempts to complete his or her animal while trying to complete their own.

Wyman, who received her masters of fine art from San Francisco’s College of the Arts, conceived her idea from her other project called “Fight Therapy,” which puts two people not used to fighting in equally awkward wrestling positions and asks them to escape.

“Many of the situations you find yourself in close contact martial arts can be quite awkward,” she wrote of the project on her website. “One person outside their comfort zone while the other person is comfortably within theirs creates an imbalance of power. Two people outside their comfort zones opens up the possibility for mutual understanding or ‘empathy’—here, the ability to feel, understand, and possibly identify with the other person’s situation.”

Collaborative Combative Drawing fosters similar experiences where the two artists fight to win but also understand through the battle the desires of their partner to win.

“I love participatory work and collaborations,” Wyman said. “As energizing as working with other people can be, it can also be frustrating and difficult, but I learn a lot in the process. I decided to combine my love of martial arts and teaching into facilitating a collaborative combative experience for other artists.”

It’s also kickass fun to watch, and I can see the participants are having a blast. But what about the results? Do these drawings have artistic merit as an object or image, or is it really more about the experience of witnessing its creation?

“I’m still asking myself this precise question,” Wyman said. “I began this project focusing more on the experience, which is essential to this project—and one must participate to really get the experience. But I’m starting to experiment with ways to make the results as visually interesting as the experience. I’ve begun layering the combative elements with more collaborative ones by giving artists the opportunity to ‘fix’ some of the results from the combative part—then combat more on top of it, and fix it more … in layers.” 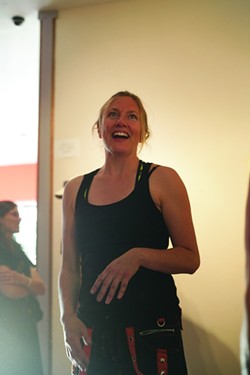 So, readers, who’s in? You can sign up for a SLOMA workshop scheduled for Aug. 10 (see info box) and get the experience, or if you just want to see the results, they’ll hang at Steynberg through the month, and the results of the workshop will hang at the SLOMA through August as well.

What happens at Fight Club stays at Steynberg and SLOMA! And in this case, it’s OK to talk about Fight Club.

On Friday, Aug. 2, multiple pairs of artists participated in a project called Collaborative Combative Drawing, in which the artists alternately painted and fought at the SLO Museum of Art. A second event takes place Saturday, Aug. 10 from 1 to 3 p.m.