What does it mean to be a man in the 21st century? Has feminism emasculated men? How can men be both authentically male and authentically sensitive? And what happens when eight men gather in a support group and end up baring both their souls and their bodies? These questions are at the heart of the new comedy-drama Welcome to the Men’s Group, which screens April 29 and 30 at the Palm Theatre.

According to director, co-writer, and co-star Joseph Culp—who with co-star Timothy Bottoms will helm post-screening panel discussions—the film was a long time coming, the culmination of Culp’s own journey with men’s support groups that began in earnest with the publication of Robert Bly’s 1990 book Iron John: A Book About Men, which sprouted the modern men’s movement.

“It’s been a long haul to bring to reality but it’s something I felt very compelled to do as a mature man,” Culp said in a recent phone interview. “It comes from a long journey that I spent exploring what is it to be a modern male today and how that’s changed since the days of our fathers and grandfathers. It’s a bit of a minor miracle—no, actually it’s a major miracle—that we got the film made.”

Welcome to the Men’s Club, which Culp wrote with his filmmaking partner Scott Ben-Yashar, is a true self-funded indie film made on a shoestring budget and shot on a tight schedule, but it features an amazing ensemble cast filled with recognizable character actors such as Stephen Tobolowsky (Thelma & Louise, Groundhog Day, Memento), and David Clennon (Being There, The Thing, Gone Girl). Like The Big Chill, it’s ensemble acting at its finest, and like Sideways, it’s an insightful exploration of men’s issues that will appeal to both men and women.

In turns laugh-out-loud funny and tenderly poignant, the film happens all in one morning when the men gather at Larry’s (Bottoms) house. Michael (Culp) brings along a new member to the group, Tom (Mackenzie Astin), who in a way acts as surrogate for the audience. He’s curious what the whole men’s group thing is about, but also skeptical. That skepticism morphs through several stages of shock and repulsion as he witnesses the raw emotions and complex relationships that are slowly revealed as the men talk and recall in flashback a party they attended previously.

“I feel passionately about these issues of male wounds, of trying to understand one another, and I felt I wanted to celebrate all the sides of men—sober and crazy and extreme,” Culp said, adding that he wanted to avoid the typical men’s comedy genre filled with “crazy camping trips, meeting hookers, or robbing a bank.”

The Hangover this is not. Instead, it explores men trying to support each other but ending up triggering each other, escalating tensions as more and more secrets are revealed until the startling, cathartic climax. It’s a movie that should be widely seen, but as a low-budget indie film, finding distribution is beyond difficult, which is why Culp—perhaps best known for playing Don Draper’s father on Mad Men or as Dr. Doom in The Fantastic Four—has taken the film through a series of these sneak preview screenings in an attempt to build awareness of the film and raise money to get the film widely distributed. 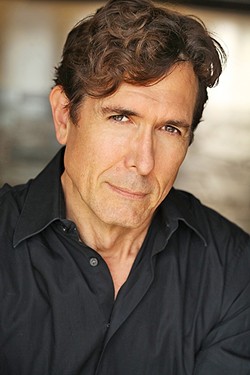 “The typical channels [of distribution] are drying up,” Culp explained. “Indie films getting picked up [for distribution] at a film festival is almost nonexistent. We’re still open to an angel coming in and saying, ‘What do you need to make this happen,’ and I think we will get distribution, but I think it will be more of a hybrid thing where we’ll co-fund [theatrical release].”

It’s certainly theatrical release quality. The performances are amazing, and this is some of the best work of Bottoms’ storied career. Culp, too, turns in a deeply authentic, emotionally raw performance. The story is complex, beautifully written, deftly filmed.

“I’m over the moon about performances and feel deeply blessed with this cast,” Culp said. “Every actor in this film wanted to do this film with a passion from the heart. Obviously, even though it looks fantastic, it’s not a big-budget film, and the actors didn’t do it for the money. They wanted the experience. As good, trained actors, they knew there were no shortcuts and that a proper rehearsal was needed to connect the group. The shooting schedule was tight, so we had to perform it like a play, like Who’s Afraid of Virginia Woolf? or The Boys in the Band. They had to know their monologues, and I had the incredible good fortune to have a cast who was on task. It is true ensemble cast work with everyone acting in service to the idea.”

The production created such tightknit bonds that an actual men’s group formed out of it. The actors still collectively meet on occasion to check in and offer support.

Culp is the son of the actor Robert Culp (I Spy, Bob & Carol & Ted & Alice), so was his own father there for him?

“I grew up the son of really famous public figure. Robert Culp was at one time one of most famous people in the country, but he grew up in the Depression and was stoic, reserved. He was a good father, a kind father, but also an absent father. I longed for a connection, and in my journey to discover myself as an artist, I think this film is about wanting to bond with other men to perhaps make up for the bond I didn’t get in my childhood. Part of my journey is healing that wound with my father and hopefully embracing and integrating all the gifts I have from having such a talented father.”