Just months after San Luis Obispo County got its first taste of maritime drug smuggling in recent memory, a second panga—a small motorized fishing skiff—beached in the area, this one north of San Simeon, near the same location as the last. 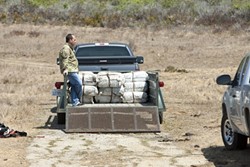 The difference: The last bunch of smugglers got away with it. This batch didn’t. And now they’re talking.

On Sept. 6, the SLO County Sheriff’s Department received an early-morning report that the panga, a type of boat known to be used for narcotics and human trafficking, was spotted on the sand near the Piedras Blancas Lighthouse.

Sheriff’s deputies, California Highway Patrol, and California Department of Fish and Game officers were dispatched to the area, where a roughly 35-foot boat was found near Carpoforo Creek Road, according to a department release.

By the time the scene was secure, officials had seized 43 bales of marijuana, weighing more than 3,000 pounds and estimated to be worth more than $4.5 million.

A witness reported people carrying parcels to a nearby motor home. Officers stopped the motor home, as well as a white truck and a black sedan also suspected to be involved, south of the scene on Highway 1 near Geronimo Road, just north of Cayucos.

By the end of the day, 20 suspects had been arrested. According to an affidavit filed by Homeland Security Special Agent Daniel R. Olgren, three suspects are U.S. citizens, the rest Mexican nationals. According to the report, some suspects agreed to waive their Miranda rights and speak without an attorney present.

Suspect statements seemed to follow a similar pattern: Most claim they were approached by someone they didn’t know, who promised good pay for just a few short hours of work. A few suspects claim they were seized at gunpoint and told that if they didn’t comply with the work, their families would be harmed.

However, one suspect claims he never saw a gun or heard threats, and that everyone involved understood the nature of the situation.

According to the Department of Homeland Security, this particular panga launched from Ensenada, Mexico.

According to Sheriff’s Department Spokesman Tony Cipolla, the suspects have been transported to the Metropolitan Detention Center in Los Angeles, where they’re facing federal drug trafficking charges.