Paso Robles collage artist Hope Kroll has a drawer in her studio dedicated to paper birds alighting on twigs. There are drawers for birds with their mouths open, another for birds with their mouths closed. There are drawers for beetles, heads, babies, veins, intestines, circles, and antiquated machinery. It’s all in there, carefully cut out with cuticle scissors, ready to become part of some future manifestation of unbridled creativity. Kroll’s system of organization reminds me of my childhood impression of god: a tinkerer in a workshop with drawers full of body parts. 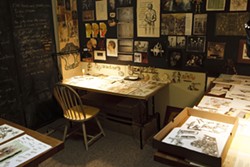 Kroll has been collaging for 12 years, but has been making things virtually all of her life.

“I’d always been interested in art,” she said, sitting at her kitchen table, “I guess because I was sick a lot as a child, and was confined to the hospital, and my bed, and there had to be something I could do in bed.”

At 7, she says, she had mastered charcoal drawing, and was formally trained in oil painting as well. She continued oil painting until she was a year into a fine arts degree at the University of Illinois, where she began exploring other media such as etching and lithography. As a graduate student at the San Francisco Art Institute, Kroll began making art with books and epoxy resin, some of which still hangs in her home. But working with the medium aggravated a health condition, and the artist eventually decided it was time to move on.

“After we moved here, in ’98, it wasn’t too long after that that I stopped. My lung had collapsed in ’96, and I was just starting to phase out working with epoxy resin after that,” she explained. “I was just over it.”

She began exploring other creative avenues, eventually beginning to cut up her books to create the intricate, often three-dimensional collages that occupy her time today. Themes of illness, outdated medical procedures, psychology, and psychosis emerge often in her work. I asked if these motifs had anything to do with her illness as a child.

“I think it definitely had an influence on me,” she replied. “At one point I wanted to be a doctor. I was studying all the bones and the muscles. I wanted to get a jump on it by studying Grey’s Anatomy, so when I got into school, I would just breeze through it. But I just didn’t really have the aptitude for remembering Latin names, in the end.”

“I did an oil painting of an open heart surgery that I got from a TIME/LIFE book. I really was enamored with wanting to be a doctor, and wanting to be a surgeon, specifically,” she said. 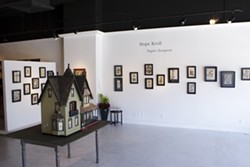 But Kroll chose to wield her sharp instruments and highly attuned motor skills in the service of making beautiful things, and the art world is that much richer for it. In a book created to accompany a show of Kroll’s work, titled The Intricacies of the Heart and Its Chambers: The Collage Art of Hope Kroll, Texas collagist and abstract painter Cecil Touchon dubbed her “the paper surgeon,” which became the title of her current show at Vale.

Works like the intensely visceral Homebody (an image of a man in a machine that looks very much like a cutaway of a house, blood vessels and organs spilling out if it) or Dreams of Sleep (in which a maze of clinical-looking tubes feed into a reclining man) look like the kind of nightmares one might have after surgery.

“A lot of people are disturbed by the medical imagery, the diseases and stuff, but in the books that I find, what I find so fascinating anyway, are human anomalies,” she said.

She cites a trip to Philadelphia’s Mutter Museum, which showcases medical and anatomical oddities, as part of her inspiration.

But there are other themes at play. Brightly colored birds frequently appear in her collages, often as messengers. Insects swarm other pieces, so thickly that, she says, she can practically hear them buzzing as she assembles a collage. Rosy-cheeked children frolic through sea-anemone forests—representing, she says, both innocence and cruelty. 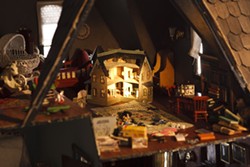 Perhaps the most awe-inspiring aspect of her show at Vale, however, is the bafflingly intricate dollhouse that sits in the middle of the gallery. The house, which took her a decade to complete, is fully furnished with all the trappings of a busy life. Some rooms are neatly organized, ready to receive guests. Others, like the attic, are messy and jumbled, with books and boxes scattered across the floor. A tiny bicycle gathers tiny dust alongside posters the size of Post-It notes. The kitchen, by contrast, is tidy and welcoming, a few miniature dishes sitting in the sink. A baby booster seat rests against a wall. A sitting room boasts several Oriental rugs, cozy armchairs, and bookcases burgeoning with titles like American Miniaturist. We notice a half-finished game of Scrabble. On the walls are several small replicas of Kroll’s art. The family apparently isn’t home, but there are several cats around, stretching and lying about. On the front doorstep, a tiny Washington Post announces the death of Osama bin Laden. A peek into the recycling bin reveals beer cans and a cereal box. The effect of the piece is deliciously voyeuristic.

Kroll made many of the items in the dollhouse by hand—most notably the miniature books, of which there are an estimated 500. The rooms in the house are similar in ambience to the home Kroll shares with her husband, a welcoming, colorful place on a twisting country road. It’s fitting, since the artist, who doesn’t drive a car and describes herself as “kind of a hermit,” spends most of her days there, creating impossibly bizarre paper wonderlands, indulging in their intricacy.

Some pieces require weeks or months of careful cutting before the assembly takes place—which in turn can take several more weeks of artistic devotion.

“But actually, I’m enjoying that, because I get to linger in the piece longer,” Kroll said. “You just want to be there, when all those things come to fruition. I want to live in it, linger there a little longer, stretch it out.”

Arts Editor Anna Weltner has a clockwork tooth. Contact her at aweltner@newtimesslo.com.