Paper trail: An Arroyo Grande woman is looking for answers in the case of how her home was burgled 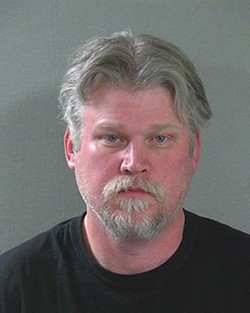 For Arroyo Grande resident Jeannie Miranda, it was normal vacation preparation in almost every way. She packed up her things, locked her doors, and told her neighbors she was going away.

Three days after she left the county, she got a call from the Arroyo Grande Police Department on Jan. 30, 2014: Her house had been burgled, and more than $30,000 worth of valuables, jewelry, electronics, and heirlooms was missing.

In the months following the burglary, Miranda racked her brain for a reason why her house was burgled, other than happenstance. Ultimately, she could only think of one thing.

“The only thing I did differently that time was that I notified The Tribune,” Miranda told New Times, explaining that she usually relies on her neighbors to pick up her daily paper, but this time she notified the distribution department of her absence and put a hold on deliveries. “There had to be a connection.”

In late March, Miranda got what she believes is confirmation, courtesy of a call from a detective in Caldwell, Idaho.

As it turned out, a man named James E. Randall had just been arrested and was in possession of Miranda’s suitcase, business card, and a number of pawnshop receipts for items from her house.

Randall’s driver’s license identified him as an Oceano resident. In a conversation with AGPD Detective William Raetz—who was investigating the Jan. 30 burglary—Miranda said she received some disconcerting information.

“Raetz told me that Randall had identified himself as a relief delivery driver for The Tribune,” Miranda said. “That was my ‘aha!’ moment.”

New Times contacted Raetz to confirm this detail, but he cited a policy that forbids him from discussing continuing investigations with the press. Raetz did confirm that there was an active burglary case involving Miranda, and that Randall was a suspect in that case.

In an AGPD investigatory report obtained by New Times, a SLO County Sheriff’s deputy is recorded as stating that “Randall had disclosed to him in an interview that he works as a fill-in driver for The Tribune and Los Angeles Times newspaper delivery services in San Luis Obispo County.”

SLO County Sheriff’s Office Spokesman Tony Cipolla told New Times that Randall was interviewed by deputies in November 2013 and was incarcerated in SLO County Jail on a parole violation between Nov. 8 and Dec. 21 of 2013.

In a follow up email to New Times, Cipolla wrote that his office was “not able to provide” information regarding Randall’s employment.

In a criminal complaint filed earlier—on Jan. 31—the San Luis Obispo County District Attorney’s Office charged Randall with nine separate felonies from earlier suspected crimes: five counts of receiving stolen property, two counts of second degree commercial burglary, and one count each of possession of firearm and possession of ammunition by a felon.

A warrant is out for Randall’s arrest as a result of that SLO County complaint, and Randall is, officially, a California state fugitive.

Chief Deputy District Attorney Jerret Gran told New Times that his office has filed an extradition request for Randall, which will be processed after Randall’s Idaho prosecution wraps up.

Randall hasn’t been formally charged for anything related to Miranda’s Jan. 30 burglary. That burglary occurred after the SLO County complaint had already been drafted and is still an active AGPD investigation.

Randall has an extensive criminal history dating back to 1990, when he was 18 years old. Among the charges listed on Randall’s rap sheet are multiple counts of burglary, two different attempted escapes from jail, grand theft, credit card fraud, assault with a deadly weapon, and vehicle theft.

Miranda said she spoke twice with Tribune president and publisher Bruce Ray, whom she described as “very unreceptive” to her complaints about Randall and suspicions regarding the newspaper’s delivery system, which has been overseen by a separate distribution company—CIPS Marketing Group—since December 2013.

“Essentially, Mr. Ray told me that The Tribune couldn’t have done anything differently,” Miranda said. “He said there was no connection between Randall and the burglary, because he hasn’t been officially charged or tried yet.”

When reached for comment by New Times, Ray deferred to CIPS, and refused to discuss The Tribune’s delivery system that preceded the CIPS takeover.

“We did make the decision to retain CIPS, but they have made all the hiring and contracting calls since mid-December of 2013,” Ray said.

Ray added that The Tribune does provide delivery addresses and vacation cancellation information to CIPS.

Paul Taylor, the Los Angeles-based operations director for CIPS, initially declined to comment entirely, but later told New Times that “there is no record of any James Randall at CIPS.”

The investigatory report obtained by New Times revealed that Taylor had been contacted by an AGPD investigator regarding Miranda’s burglary, but was “uncooperative” and “declined returning calls regarding the identity of the delivery person for the dates in question.”

After recently seeing a Craigslist job posting for Tribune delivery drivers, New Times contacted the poster, who was a local CIPS manager.

The manager, who only gave his first name, said he regularly hires drivers via Craigslist as “more of an informal thing” due to high turnover among drivers and that he doesn’t conduct background checks for his Craigslist hires. He didn’t recall hiring or working with Randall.

New Times’ call with the manager was disconnected at this point, and he didn’t return multiple follow-up calls.

The last item on the report obtained by New Times states that the detective’s only remaining follow-up in investigating the Miranda burglary is to “interview Randall” and “locate Driver for Tribune and question regarding driver at time of burglary.”