Roastmaster Reid Patterson doesn’t always sleep in his own bed. Perched high on a secluded mountain off a steep dirt road on the south side of town, the 61-year-old house his family purchased in January off of Bridge Street feels like sacred ground; a relic of the beatnik generation.

Creative ghosts howl through its sturdy steel frame (the eccentric couple who built the home were a welder and artist, respectively). Thick curls of metal—not unlike the flourishes that adorn a Madonna Inn cake—pop from unexpected places. A wrought iron industrial chicken-feeder-turned-fireplace anchors the open floor plan. Chunks of rock and salvaged wood pop out at every corner, as if the land were taking the whole thing back, eating itself. 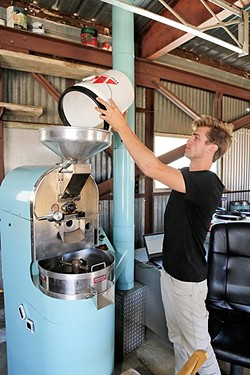 On a recent sunny morning, we sat at the breakfast table with steaming cups of Patterson’s balanced Guatemalan roast. Between sips, we talked about good beans, good wine, and the unmistakable thread that unites the two worlds. Behind us, a literal wall of windows afforded a panoramic view of San Luis Obispo and the old ironworks below. I could see what Patterson meant when he said he often sleeps in “the shop” nearby. Although the property offers plenty of space to work on his business and passion, Paradigm Coffee, it can all feel a bit frenetic. And that’s without two cups of caffeine.

“The house has an energy that’s really, really strong. Some people walk in and they really harmonize with it; other people, you can feel their resistance to its openness,” he said.

Patterson, himself, finds that the openness can be too energizing; it keeps him up late at night. That’s why the roaster beds down in the nearby workshop. The space is rustic and unadorned save for a shining, powder blue commercial coffee roaster. He likes to be near his work.

I had only known Patterson for an hour, but this already made total sense. With searching blue eyes and a shock of dishwater-blond hair, the 24-year-old is sensitive and empathic, a philosopher as much as he is a coffee nut. He’s both a chemist and an artist, and he has that contagious “millennial confidence” that comes with seeing the world through a fresh perspective.

The shop, also constructed of world-weary salvaged metal, contains all of Patterson’s aspirations—aromatic dreams that smell like earthy chocolate, roasted caramel, and old wood. It is there that Patterson creates the unique specialty coffee he supplies to The SLO Foods Cooperative, Black Horse, Lincoln Deli, Morro Bay Coffee Co., Sunshine Café, and the new Lassens grocery store on Foothill Boulevard in SLO. For locals, he also offers free delivery.

The offerings—single origin roasts sourced from specific growing sites in Brazil, Colombia, Ethiopia, Guatemala, and Nicaragua—reflect the land from where they flourished; not simply the country or the region, but the specific farm. In this way, Patterson is a lot like a boutique winemaker concerned—OK, more like obsessed—with terroir.

“The whole concept is to take the paradigm of wine and apply that to coffee,” Patterson said. “My goal is to take the beans and through the roasting process—which is my craft, what I have control over—to display the characteristics I feel are the most relevant. The beans themselves are from a specific area and have unique characteristics, and my roast style works to magnify that. I strive to balance the various flavor aspects that the coffee has to offer.”

Raised in rural Saratoga, just west of San Jose, Patterson worked with his parents at Mount Eden Vineyards, which eventually became the family business. Surrounded by vineyards and barrels, he grew up with the belief that having dinner as a family was just as important as exploring interesting flavors on those plates.

“I hated every second of it; but over time, I developed into someone who loved to learn; who loved the exploration of flavor, especially when it came to wine,” Patterson said.

After a stint at Sonoma State, Patterson transferred to Cal Poly and threw himself into the wine program. It’s not often you hear a 20-something say that they “needed more intellectual vigor” in their life, but that’s exactly how Patterson said he felt at the time. He needed more meat to sink his teeth into, and chemistry seemed to be a natural progression (after all, many culinary and wine greats come from this world, where the interactions between chemicals create interesting explosions of all kinds). Patterson asked himself, “What is flavor if not a physiological reaction colliding on your palate?”

Where does the coffee come in? Well, it never really left. Patterson, an avid home roaster, had loved coffee for some time, first discovering specialty roasts in Healdsburg, Calif., with his friend Patrick Maloney, now a business partner.

Patterson still remembers that moment clearly: The romance with good coffee all began with an El Salvadorian roast he described as “light, delicate, and sweet, with a fruity profile.”

“I had a paradigm shift. My reality of coffee expanded and showed me that there is more to this beverage, this product,” Patterson said. “I had been drinking standard Peet’s coffee up until then, and it didn’t excite me in any way. It was more about the caffeine. I started traveling around the Bay Area, learning about other roasters and coffee shops; the origins and different varieties and what affected flavor.”

Like a fruit forward California cabernet sauvignon or an acidic vinho verde grown in Minho province of Portugal, each Paradigm coffee and its distinct flavor profile can be traced back to specific growing grounds. This is the “specialty” behind his “specialty coffee,” and why it costs more than your average gas station java. 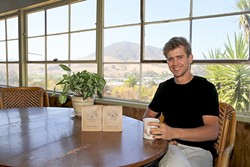 Although Patterson said his goal is to source directly from growers, right now he’s doing the next best thing: working with an extremely transparent third party supplier that does deal directly with the weathered faces behind the beans.

In return, the roaster receives site-specific product and can feel confident that the growers who produced that product receive fair payouts.

Like the use of “organic” labeling in U.S. markets, terms like “single origin” and “fair trade” can sometimes be misleading or murky; it often does not pinpoint the bean down to the exact plot of land where it was grown.

“In Africa, for example, almost all farms use the cooperative model because the farms are so small,” Patterson said, explaining that with the cooperative method, a bag of “single origin” beans can come from thousands of these smaller farms spread out across the region.

“Within Central and South America, you can find larger single farms, and from here you can get closer to the unique character that the farm offers.”

Instead, Patterson aims to cultivate close relationships with exceptional farmers and farms, understand the growing practices at play in those places, and pay a premium cost for those “magic” beans.

This, in itself, is a paradigm shift I can personally attest to having experienced in my own life. My shift was not unlike Patterson’s historic day with that hot cup of Joe. I own a bean grinder and live by the motto: “If I feel compelled to put cream or sugar in it, I shouldn’t be drinking it.” However, there is a difference between Patterson and me. He based his senior chemistry thesis at Cal Poly on “coffee brewing chemistry.”

His use of the word “paradigm” as his business name is linked to this understanding of science.

“In chemistry, I look at data that a machine has analyzed. On the surface, they are just numbers on paper, and numbers don’t mean anything until they are applied to the paradigm of chemistry, a paradigm that I have been taught,” he said. “From there, we can construct a larger reality that expands with the science. With the paradigm of coffee, it can be a simple caffeinating vehicle.”

Patterson said he isn’t taking a dig at folks who do that (he did that back in school), but he is saying that people can change; ideas can expand.

Case in point: As Patterson performed an artful Chemex pour-over that morning, I noticed the coffee in the glass bowl to be light and fiery in color, almost a reddish amber. I hadn’t ever thought to look at coffee the way you would a wine—to hold it up to the light.

The balance of earthiness to rich nuttiness to acid played on my tongue. I waited, but no bitterness came. This is a coffee that I would never spike with creamer, sugar, or—God forbid—whipped cream. Apparently, I’ve transcended that realm, although—and this is key—I would never self-righteously rail against someone ordering a caramel macchiato at Starbucks.

As Patterson likes to say, this whole specialty coffee business isn’t about changing what people think about coffee. It’s about an expansion in consciousness.

“With science, we have had certain scientific revolutions: before modern physics, for example. But we don’t forget the old paradigm, we just build on it,” Patterson said. “I didn’t forget my old experiences with coffee. But when I found a new coffee that excited me, it expanded what coffee could be. Therefore, it opened up the rabbit hole I could then fall down.”

Hayley Thomas is jittery and she likes it. She can be reached at hthomas@newtimesslo.com. Follow her epicurean adventures on Instagram @flavorslo.