Parading again: Downtown SLO's staple holiday event is back on Dec. 3 for its 45th anniversary

On the first Friday night in December for almost a decade, Carl Dudley of Pacific Western Bank has stood at the corner of Chorro and Palm streets in downtown San Luis Obispo and faced a line of cars and floats that stretched for blocks.

When 7 p.m. strikes, and anticipation builds, Dudley, a volunteer since 2006, kicks off the SLO Holiday Parade. One by one, floats look eagerly to him for the green light to start their struts through downtown. Thousands of locals line the sidewalks, sitting in lawn chairs and covered with blankets.

"Everyone has to go through me," a chuckling Dudley told New Times about his role as parade starter. "I get to see everybody. That's the real plus." 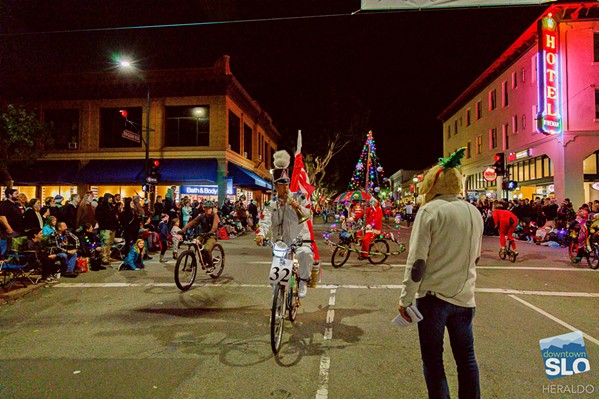 Dudley looks forward to playing this ceremonial role at SLO County's staple holiday event every winter. But last year, his streak at the starting line came to an unexpected end. Due to COVID-19, the parade was canceled, and the typical 10,000 or so locals who are involved were told to stay home.

"It was sad," Dudley said. "You have tradition, and then all of a sudden you have a hole. I enjoy the parade. It brings the kid out in you. It's a good family event for us as part of the downtown community."

This December marks the triumphant return of the SLO Holiday Parade. The pandemic can't keep it down for another year. On Dec. 3, the parade—and Dudley—will be back as if it never left, for its 45th anniversary.

"It is so exciting," said Bettina Swigger, CEO of the Downtown SLO association, which puts on the parade. "We're ready to flex those muscles again."

With a California Dreamin' theme, the parade will look mostly like it has in years past, with some pandemic-related quirks, changes, and additions, according to Swigger.

For starters, the parade will have to navigate around downtown's new parklets, which were installed at eateries last year to facilitate more outdoor dining. But Swigger said the parklets actually add a fun new element to the parade, as diners can watch it up close over food and drinks.

And "never fear," she said, there's still plenty of sidewalk left for families and spectators to plant down their lawn chairs as always. The parade route will also remain the same.

"There is plenty of room to do that," Swigger said. "There are 28 parklets, not all are on the parade route."

Downtown SLO has some special plans in store to respect and recognize the reality of the pandemic, the toll it's taken, and the people who have put themselves on the front lines to fight it.

"We are honoring our first responders and health care workers," Swigger said. "We're going to start off our parade with workers from Tenet Health and Dignity Health [hospitals] and San Luis Ambulance. That's a way of saying thank you."

Then, about 80 parade groups—representing schools, businesses, nonprofits, and organizations of all stripes—will take to the streets to showcase their creativity and holiday spirit.

The California Dreamin' theme, voted for by locals in a social media poll, is going to bring out the glorious diversity of the Golden State, Swigger said.

"It's a pretty well-encompassing theme," she said. "We can expect to see a lot of beach themes, maybe people with surfboards."

While canceling the parade last year was a difficult decision for Downtown SLO, Swigger said the silver lining was that it forced the association to come up with other COVID-19-safe holiday offerings for families to enjoy downtown. Some of those are returning this season, by popular demand.

"We're really going all out," Swigger said. "The installations in Mission Plaza—we're bringing those back in a different format. There are some amazing things happening: Santa outside on his front lawn, a giant walkthrough ornament, a 20-foot Christmas tree, photo ops around the California Dreamin' theme. We're also going to have a scavenger hunt with the Children's Museum."

The SLO Holiday Parade and downtown's other holiday festivities take months to plan and the efforts of people from all sectors of the city and community. Swigger said that the parade organizing typically begins in the summer and that by the first Friday of December, literally hundreds of people have poured their time into orchestrating the evening.

"It really does take a whole village," she said.

Dudley said he's excited to see that epic line of floats on Chorro Street once again.

"The participants have got to be stoked, especially the kids because they missed last year," Dudley said. "I think families and people in general need some type of normalcy, and this offers it."

While Dudley's only been involved in 15 of the 45 SLO Holiday Parades as an organizer, he's seen how the annual tradition anchors the community and unites families who return year after year.

"You look in the last 45 years at how many things have changed, and this is a constant," he said. "The amount of energy that's put in not only by staff but also by the city, the community, and the participants—some of these organizations probably have been there 45 years and have participated in it.

"Just to be able to keep a tradition going like that is always impressive." Δ