Burger Village promises to serve hormone/antibiotic/rBGH/GMO/herbicide/preservative-free, sustainable, organic, environment-friendly food. And it's tasty too. Hours are 11 a.m. to 10 p.m. Sunday through Wednesday and 11 a.m. to midnight Thursday through Saturday. Happy hour is Monday through Thursday from 2 to 6 p.m. for $3 beers. Burger Village is located in the old Natural Cafe building at 698 Higuera St., SLO. Visit Burger Village at burgervillage.com or call (805) 449-1663 for to-go orders.

My teens and I arrived at Burger Village on a night like no other, specifically when the Houston Rockets barely beat the Boston Celtics on that five-game winning streak. My oldest and I took the boothside so we could watch the game on three screens, under a Cal Poly banner. With local beers, organic burgers, and a crafty, clean setting, I like this place as a bonding hangout. My kids keep talking about the best burger and milkshake they ever had—"ever-infinity"—and I like that their meal out was actually good for their growing bodies.

Lively with music, pumping with students, families, couples, singles, and bros having a tall one, I guess we all like a good burger (even the vegans). 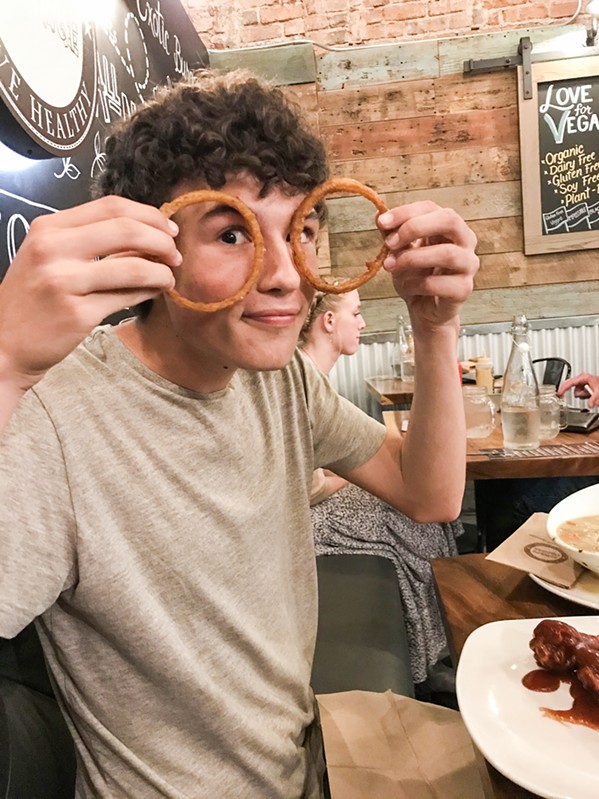 Co-owner Ashish Verma, who goes by "Ash," estimates that one out of every four burgers that come down the line is vegan. See, meat-eaters and vegans can all get along. So let there be peace on Earth, brothers and sisters.

My little meat-eater and middle-schooler, Tony, ordered the bison burger, but if you're an adventurous eater like him, you could go for the second most popular meat. That would be the elk burger. The most popular is, of course, a grass-fed, grass-finished organic hamburger on an Edna's Bakery bun.

Upgrade to the "My Deer" for three more dollars and you're in business with the addition of pepper jack, lettuce, tomato, sauteed mushrooms, jalapeño, and the mysterious signature sauce. No. 3 on the Parts Unknown list of burgers is the Village Ostrich Burger, according to Verma.

"We didn't expect elk to be this big of a seller, but I think there are a lot of hunters in this area," Verma said. "Ostrich is more about curiosity. ... People want to find out what it tastes like, but it's the leanest meat that we have. It's 95 percent protein and only 5 percent fat."

He said the way Burger Village serves it makes it even healthier. 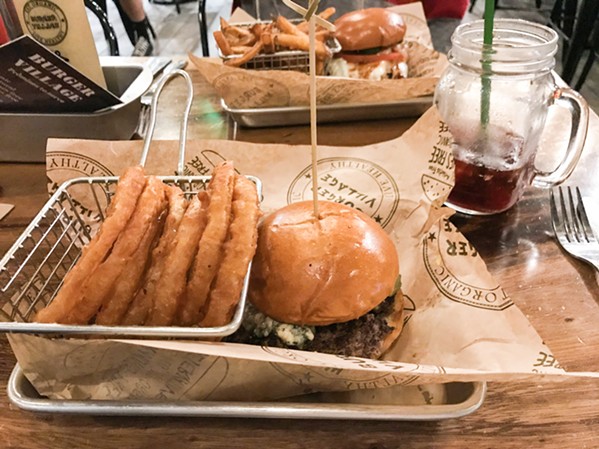 "We don't put anything on any of our patties," he explained. "People should try the natural flavor of that meat."

No salt. No pepper. No oil. They make the patties when the order comes in and put them on the grill.

"At the same time, we created all these toppings to add more flavor," Verma said.

And you have to see it on the menu to really explore what he's saying. The Signature Pairs are designed to match each burger, dog, or sandwich. The Good Dog relish, sauteed onions, and mustard goes with the Village Hot Dog. The Wild Terrific Pacific matches the wild salmon burger because of the tartar sauce and fresh chopped cilantro. But no one's judging if you want the Gobble Gobble toppings of pepper jack, baby arugula, pico de gallo, bacon, and honey mustard on your wild boar rather than your turkey burger. Be all you can be, and don't forget to look at the dipping sauce selections.

I'm straight-up boring when it comes to my burgers. I don't want anything fancy—just good, quality organic hamburger on a bakery bun. The B-Ville had what I need: classic, organic, grass-fed beef with blue cheese, subbing my fresh cut fries for the onion rings. If you look at the fine print on the menu, you realize there are all kinds of substitutions for dietary needs: sweet potatoes if you are paleo, multi-grain bun if you don't want the brioche, fried pickles or cole slaw instead of fries.

Co-owners Verma and Alex Shubbie opened the West Coast Burger Village in July 2019, after a visit to Brooklyn, New York's Burger Village changed their life. They were so into it that they talked the owners (four brothers from Long Island) into franchising out here in SLO, after the brothers flew to SLO to check out our health-nutty town. 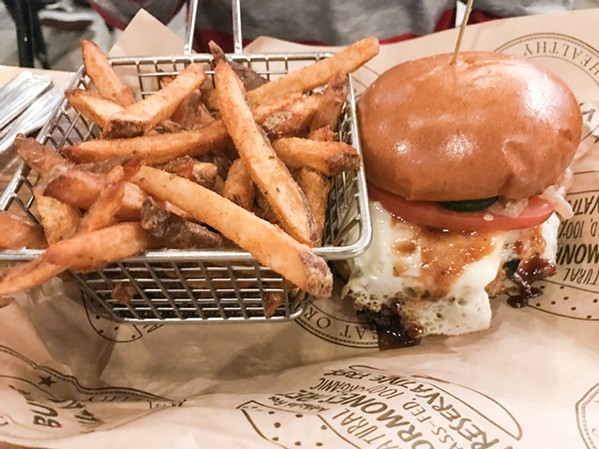 Verma said he always wanted to be an entrepreneur. He moved from India to America when he was 17, grew up in Ventura, went to college, became an investment banker, then bought two El Pollo Locos in SLO County. He and Shubbie met at the gym. But what were those two doing in New York?

"We were just hanging out in New York when we came across this concept," Verma said. "We saw all these different meat options that we've never seen before, and then on top of it so many vegan and gluten free options, so that got us excited."

I did take a look at the seven vegan and vegetarian options with add-ons he was talking about. Looking around at my neighbors' plates, those secret spy burgers blended in just like my burger, including the plant-based vegan burger called the Impossible Burger. You could pair it with The I-M-Possible Burger Signature Pair: vegan mozzarella, sauteed mushrooms, fresh jalapeño and spicy vegenaise sauce for even more flair.

Verma says organic burgers are the trend. He's always been aware of what people want, and he knows he's not feeding his own 2-year-old daughter anything but organic.

When we came in, on a Saturday night, Verma was working the bar and checking in with the waitstaff. He's a very hands-on owner. He checked on our table twice and even brought me a refill of organic craft cherry cola. The waitstaff was very attentive and upbeat. My kids said our waiter was the coolest, and they commented on the fine penmanship of the chalkboard art. Meanwhile, they kept zapping my onion rings. Which I get. They're really thin and crispy on the outside, tender and salty on the inside. My burger was juicy and fresh, oozing with blue cheese and crunchy with tangly pickles. I can't believe it, but I left one bite—just one. The burger was so filling. I didn't want to hurt, and at this point in life, I'm an expert at knowing my carrying capacity.

We left completely charged. My kids made me promise to take them back to Burger Village, and my son, Tony, made the perfect argument: "It's organic Mom, so it's the right thing to do." Δ