On Aug. 30, the Oceano Dunes experienced its second accident-related death of 2015.

The victim, 27-year-old Fresno resident Leo Esqueda, was driving a Chevy Blazer on the dunes just after 2 p.m. when he was involved in a single-vehicle rollover accident, according to California State Park Officials. The accident occurred when Esqueda failed to navigate a steep dune, and he and his passenger, neither of whom were wearing seatbelts, were ejected from the vehicle. 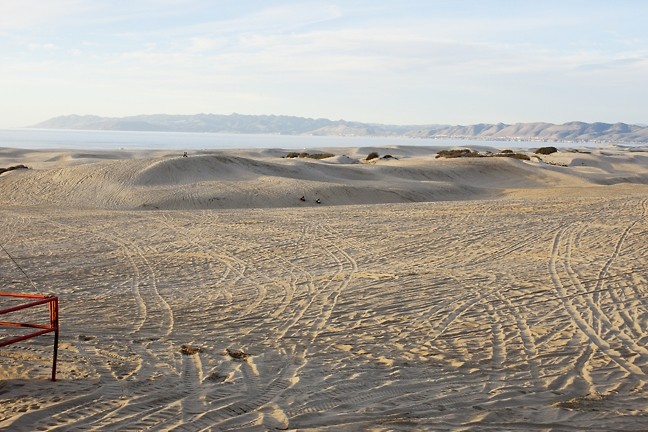 Prior to Esqueda’s death, San Francisco East Bay resident Erwin Baker was killed April 4 while navigating a steep dune in an open driving area at the park on an ATV, according to a report from KSBY.

The Oceano Dunes State Park Vehicular Recreational Area is located on 5.5 miles of beach, and is the only such park in California where individuals can drive vehicles on the beach. This fact has made the park an incredibly popular, and busy, spot.

But the park, while unique, can still be dangerous for those who aren’t careful. When it comes to deaths and accidents on the dunes, Bellman said many of them are the result of single-vehicle accidents, not collisions. At least one possible factor in such accidents is speed, and another is the nature of the dunes themselves, which can change and move due to wind and weather.

“It’s a dynamic setting,” she said. “If you haven’t been out here for three or four months, the terrain could be very different.”

According to statistical data obtained by New Times from the California Parks Department, there’ve been an average of about two deaths per year at the Oceano dunes between 2005 and 2014.

Bellman said regulations enacted in 2010 requiring all vehicles on the Dunes to be equipped with flags on long, flexible poles called “whips” may have helped. She also credited the drop in overall accidents to increased enforcement actions, such as warnings and citations for those who don’t properly follow rules at the dunes, as well as a push to educate the public about safety and etiquette at the park.

“In 2011 we launched a huge outreach program. We had exhibits and messaging and were going to industry shows and local events,” Bellman said. “Really it’s about changing people’s perceptions about how they view their riding experience, and getting them to take ownership of that. It’s their park.”

And are OHV users heeding the call to take ownership? At least some of them are. Jim Suty is the president of the nonprofit Friends of the Oceano Dunes. He said the organization has coordinated and run a volunteer safety patrol program for the last eight to 10 years.

“These are riders who will go out and interact with the public,” he said. “If we see them doing something like speeding on the beach, we can talk to them, and maybe save them a ticket. We’ve always promoted safety.”

Suty said the experience level of drivers out on the dunes varies from those with years of experience to people brand new to OHV vehicle riding. He encourages park visitors to read the safety materials and maps given out by parks staff and riders to take their time and get to know the environment in the park.

While much of the focus for dunes activity is on off-road vehicles, Bellman said that OHV users aren’t the only groups who use the park. She noted that kite surfers, equestrian riders, and fishing enthusiasts also frequent the dunes. They all have a stake in using the park in a responsible manner and working together.

“Everybody wants to keep their opportunity,” she said. “So they find a way to make it all work.”