Park-paving lot gets go ahead in feisty meeting

There was no rehearsal meeting for the new SLO City Council, and the body could have used one. The Dec. 2 meeting was like a shot of whiskey when some members wanted a nice warm glass of milk for their introduction to council service. The catalyst? The proposed parking lot for the senior center in Mitchell Park .

The proposal has long been a tense issue, with the park’s neighbors showing up to meeting after meeting to oppose the project. But never in the year-long history of the project have tempers flared like they did at the most recent meeting, and rarely has the council broken with protocol to such a degree.

The fireworks started as the board rejected each of the three options before it and voted instead to approve, 3-2, a redesign conceived and distributed by Mayor Dave Romero and new council member John Ashbaugh. The plan, with one less spot and no exiting driveway, came as a surprise to the remaining council members and most of the public.

Jan Marx and Allen Settle were in the minority. The measure will go back to staff for more study, and is to come back to the council Jan. 6.

The move to look at new options was a departure for Romero and Andrew Carter, who, under the previous incarnation of the board, declined to consider staff- offered alternatives to the plan. Before she was sworn in Marx made clear she would vote against any proposal to pave any part of the park, leaving Ashbaugh as the question mark before the vote.

About 30 speakers addressed the council during the meeting, including former council member Paul Brown, who alleged that Ashbaugh was not happy to have the decision before him. Indeed, Ashbaugh was reticent to declare a position, until pushed by another council member.

The meeting went downhill from there. 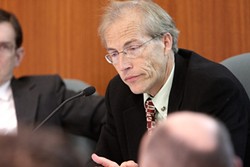 The redesign came about after Ashbaugh sent some ideas to staff and the other council members about a revised version of the parking lot. Mayor Dave Romero took that input—independently—and sketched a plan for a parking lot. Staff cleaned up Romero’s design, and it was ready to present at council. Although it was completed the day before the meeting, it was not distributed to council members.

When the new design came up on the projector, it was a shock enough to silence nearly everyone in the room. Romero smiled approvingly at his design; Marx and Settle sat back and stared in apparent shock, Andrew Carter took a meditative pose, and most of the audience, who filled most of the seats in the room, just looked confused.

The new design addressed several pitfalls of the previous one; it eliminated a driveway proposed next to the children’s playground and managed to steer clear of a heritage tree, which some people had warned would be harmed if its roots were paved over. The new proposal is also cheaper.

The meeting became tense when Marx questioned why the fourth option, which was not on the agenda, was being pushed even though it was not critically reviewed by staff or council. Ashbaugh then erupted, leaning forward in his chair, and warning Marx not to suggest that council members were doing any back-door dealing.

Marx said in an interview that she felt the normal process was subverted, noting that there was no traffic study or any other design study done before the council approved the new plan.

“I was disadvantaged,” she said “as was the public. ...I have never had anything happen like that in the four years I was on council.”

“ I wish it would have been more consistent with standard procedure,” Marx went on. “And we could have looked at more designs.”

If the design was news to fellow council members, it wasn’t to many in the community.

Several people not on the city council had seen the design at the second of a series of Ashbaugh-called “sidewalk meetings” held in Mitchell Park the night before the vote. Although Marx, Settle, and Carpenter had not seen the design before the meeting, Ashbaugh was able to sketch it out, and show the group where its boundaries were on the site, and talk in-depth about the plan that was eventually approved Tuesday night.