According to the sign outside Parkfield, its population is 18 souls, but come Mother’s Day weekend, the little unincorporated hamlet dubbed the “Earthquake Capital of the World” will swell a bit when the Bluegrass Music Society of the Central Coast proudly presents the 18th Annual Parkfield Bluegrass Festival on Thursday, May 5, through Sunday, May 8.

It’s an easy and scenic drive to Parkfield, located on Little Cholame Creek just 21 miles east of Bradley, just inside Monterey County. Some bluegrass lovers show up for the day and drive home, others bring RVs or tents to camp for the long weekend. 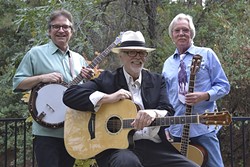 “It is a great little event,” Curtis Reinhardt, the event’s promoter said. “I always feel like I am in a different world even though I’m less than an hour from SLO. It’s as much fun as Live Oak—just smaller and in a unique setting.”

Like the Live Oak Music Festival in Santa Barbara County, a whole new little community springs up in Parkfield to enjoy four days of concerts, music workshops, children’s activities, and round-the-clock music jams. The first band, the Sweetwater String Band, starts at 1:30 p.m. on Thursday, and the festival will keep on rolling until the Honeysuckle Possums close out the event at 5:30 p.m. on Sunday. The music runs from 9:30 a.m. to midnight on Friday and Saturday. You can check parkfieldbluegrass.org for the complete lineup and schedule, but this year’s headliners include Gold Heart at 9 p.m. on Thursday; Crary, Evans, and Spurgin playing at 9 p.m. on Friday; and Jeff Scroggins & Colorado at 9 p.m. on Saturday. 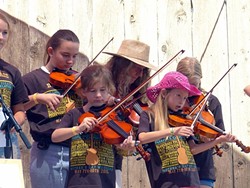 Jeff Scroggins & Colorado, based in—yep, Colorado—is a high-energy quintet with a “range of influences that marry second- and third-generation bluegrass, delivering a unique experience that captivates audiences and keeps them guessing: It’s a powerful, high mountain ‘bluegrass explosion.’”

Other performers include Snap Jackson & The Knock On Wood Players, the Amber Cross Band, AJ Lee and the Valley Ramblers, the Evie Ladin Band, Cuesta Ridge, Sweetwater String Band, One Button Suit, Burning Heart Bluegrass, and many more. There’s also an adorable kids talent show, a Friday night barn dance, and new this year will be walking tours of the San Andreas Fault led by a USGS geologist.

Since Parkfield averages a magnitude 6 or greater earthquake about every 22 years, you never know when one might hit, but the good news is, in this sleepy town of 18, there aren’t many buildings to fall down on you. Anyway, if the big one hits and you’re gonna go, you might as well go listening to some kickass bluegrass!

Numbskull and Good Medicine Presents has lined up two nights of killer Americana music, starting off this Thursday, April 28, with the rocking country sounds of Micky & The Motorcars at Tap It Brewing Co. (8 p.m.; 21-and-older; $12 presale at ticketfly.com or $15 at the door). 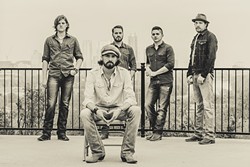 The twin vocal attack of brothers Micky and Gary Braun give the band its distinctive sound (older brothers Willy and Cody Braun are in Reckless Kelly, and their talents flow from father and full-time musician, Muzzie Braun). The brothers have been singing together for 25 years and it shows. Their band formed 11 years ago in Challis, Idaho, and they’ve now got six albums and God knows how many shows and miles under their belts.

In addition to Micky (vocals, acoustic guitar) and Gary (vocals, guitars, mandolin, harmonica), the band includes Joe Fladger (bass), Dustin Schafer (lead guitar), and Shane Vannerson (drums, percussion). They described themselves as “a little rough around the edges,” which to my mind means their music exudes real emotion. Hop a ride on this motorcar—it’ll be a great time.

On Friday, April 29, the fun continues with the countrified Turnpike Troubadours and their raucous guitar- and fiddle-driven sounds, with opener Jason Boland and the Stragglers at the Fremont Theater (7p.m.; all ages; $26.50 to $38 at tickeyfly.com).

One of the famed “red dirt” bands out of Oklahoma, they’re led by Evan Felker who writes the majority of the lyrics.

“All the songs are about people we know,” Felker said in press materials. “And yeah, some of them are probably about me to some degree—the guy who ticks off the wrong girl from Arkansas, and the guy who doesn’t always like what he sees himself becoming. Mostly though, I think they’re just honest.” 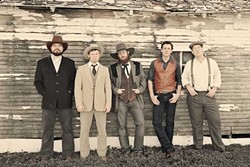 They also all have a little tinge of outlaw country, too.

“We all pretty much grew up with hardcore country music around us,” Felker continued. “I mean, sure, there was rock stuff in there, but the real old-school stuff, plus exposure to folks like Jason Boland and Cross Canadian Ragweed, really affected what we were playing. We’re really a product of both our influences and our environment. It wasn’t something that we sat in a room and dreamed up in one day.”

It’s an authenticity you can feel in every note.

Also on Friday, April 29, Good Medicine Presents hosts Jill Knight at a free pop-up concert at Tooth & Nail Winery (5 p.m.). And mark your calendars for Mayer Hawthorne for Thursday, May 5, at the Fremont Theatre (8 p.m.; all ages; $23.85 presale at tickeyfly.com or $25.85 at the door). Hawthorne has more than 100 million plays on YouTube, Spotify, and other internet sites, and his sophomore album How Do You Do earned him a Grammy nod.

Put some funk in your trunk 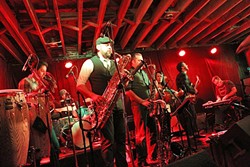 Hot on the heels of their successful Jungle Fire show, the SLO Record Swap continues its foray into concert promotion with another jumping funk and soul show when they team with KCBX Public Radio, Boo Boo Records, and Good Medicine Presents to bring the incredible Sure Fire Soul Ensemble to Tap It Brewing Co. on Sunday, May 1 (doors at 4 p.m.; all ages; $12 presale at Boo Boo’s and ticketfly.com, or $15 at the door).

“If you’re a fan of the organ (and we know you are), gritty funk, and beautiful original soundtracks, these guys are for you,” promoter Manuel Barba said. “The SFSE is a heavy, original, instrumental soul band based out of San Diego, that released their debut self-titled album on Colemine Records in June of 2015, as the band readies their sophomore album in the fall of 2016 on the same label.” 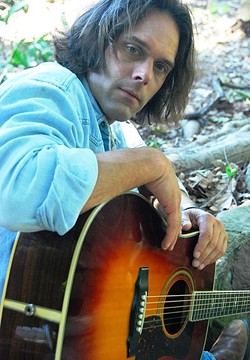 On Friday, April 29, Friday Night Live of SLO County will sponsor the 25th Annual Friday Night Live Mock Rock & Talent Blast at the Performing Arts Center at Cal Poly (7 p.m.; all ages; $14 presale at slofnl.com or $17 at the door). The show will feature more than 150 local high school students lip-synching and performing various talent acts, competing for cash prizes and the title of Mock Rock and Talent Blast Champions! “The show is comprised of 20 acts: half talent, half mock, and all amazing!” according to organizers.

Los Angeles based singer-songwriter and recording artist Chris Laterzo is the kind of dude who rents a house in Joshua Tree, holes up, and pours his whole self into the recording process. This Friday, April 29, he’ll play the Steynberg Gallery (8 p.m.; all ages; $15). His fifth album, West Coast Sound, blends “varying degrees of folk, rock, and alt-country—Laterzo is an artist who continues to create a unique style of song best described as American cowboy-rock,” according to his bio.

This Saturday, April 30, prepare yourself for a magical experience when Café Musique plays a fundraiser for Orchestra Novo at Kelsey See Canyon Vineyards. Your $75 ticket includes an Oki Momo Asian grill dinner plate with dessert and one glass of Kelsey 2014 Consonance wine (a double gold medal winner!). The event starts at 6 p.m.; tickets available at  brownpapertickets.com.

San Francisco indie music scene makers Sugar Ponies will bring their self-described “irresistible sound” to Linnaea’s Café this Saturday, April 30 (8 p.m.; all ages; pass the hat). Their sound is “a sexy, sassy, rocking, unfailingly melodic blend of country, rock, classic pop, folk, and whatever else these fearless songsmiths feel like tossing into the mix.” Listen online to their entry “ Give This Girl a Break” for the NPR Tiny Desk Contest and be prepared to be wowed by singer Suzanne Kramer’s gorgeous voice. Singer-songwriter Bijan Navid opens. They’ll also play Sculpterra Winery on Sunday, May 1, as part of a Songwriters at Play showcase (1 p.m.; all ages; pass the hat).

Cal Poly organist Paul Woodring will take another spin over the keys of the massive Forbes Pipe Organ this Sunday, May 1 (3 p.m.; all ages; $20 student and $30 general admission at 756-4849 or online at calpolyart.org), at the Performing Arts Center for his fifth Forbes Pipe Organ recital: “The Forbes Pipe Organ is like an engraved invitation to creativity,” Woodring enthused. “With its gorgeous foundational tones, brilliant reeds, and delicate flutes, an organist can craft a beautifully balanced recital. My program will feature a selection of great masterworks by J. S. Bach and Maurice Duruflé, as well as a ‘United Nations’ celebration of music from Portugal, France, Italy, and Germany. Throw in some Gilbert and Sullivan, Scott Joplin, and a Russian toccata and you have an afternoon of entertaining music on the pipe organ!”

Jazz Vespers returns to the historic sanctuary at SLO’s First Presbyterian Church this Sunday, May 1 (3 p.m.; all ages; free will offering). The G-2 Project—featuring pianist George Garcia, bassist Keegan Harshman, and drummer Darrell Voss—will perform this evening of jazz music with a message. A reception follows.