On June 5, the inside of the large barnlike structure at Holland Ranch was bathed in a red glow from a large neon sign on one of the walls. As a DJ played Marvin ' "What's Going On," Holland family members and supporters spoke softly to each other and traded a few hugs. They'd come to watch the election results in the expensive and contentious race for SLO County Sheriff. 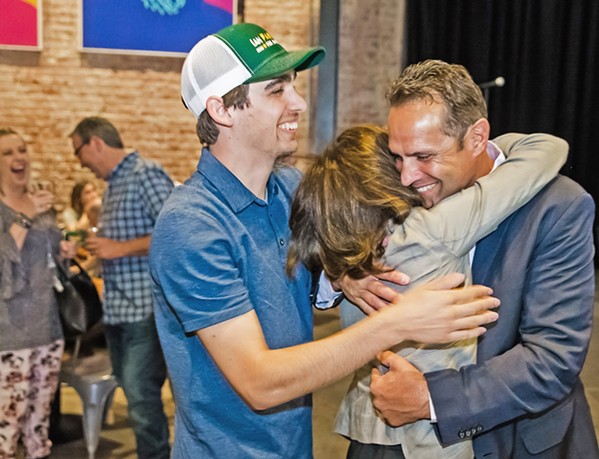 The crowd at Holland Ranch was rooting for their candidate, local private investigator Greg Clayton. Clayton, who'd never run for office before, acknowledged his underdog status earlier in the night before the first returns came in.

"We gave it our best," Clayton said. "It was a David versus Goliath situation and I knew it. We were up against big money and influence in our local community."

Initial results favored incumbent SLO County Sheriff Ian Parkinson with a commanding lead. As of June 6, preliminary voting totals showed that lead remained virtually unchanged, with Parkinson garnering 32,531 votes, or 61.52 percent of the vote compared to 20,309 votes, or 38.41 percent, for Clayton. While there were still some votes left to count the day after the election, Parkinson's re-election is all but guaranteed.

The main focus of Clayton's campaign against Parkinson revolved around the highly publicized and controversial death of Andrew Holland, a 36-year-old schizophrenic man who died in the SLO County Jail in April 2017 after being strapped into a restraint chair for 46 hours. Holland's family received a $5 million settlement from the county as a result of the death and backed Clayton's campaign, donating more than $89,000 in monetary and non-monetary contributions. During the campaign, the Holland family and Clayton were highly critical of Parkinson's response to Andrew's death, claiming that he engaged in a cover-up and misled both them and the public about the facts surrounding the death. 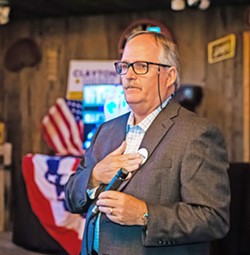 Clayton said that his primary focus in the campaign was to carry forward the narrative of Holland's death and bring attention to the mistreatment of mentally ill inmates in the jail.

"Win or lose this election, I held true to that promise," Clayton said. "I stood up, but I didn't stand alone."

Less than 10 miles from Holland Ranch, Ian Parkinson and his supporters gathered at SLO Brew in downtown SLO to celebrate. Amid green and gold balloons and constituents sporting stickers and hats bearing his name, Parkinson reflected on the campaign for his third term, which he characterized as one of the toughest and most challenging he's ever faced. During his run, Parkinson was the focus of withering criticism from his opponents and critics, particularly after footage of Andrew Holland's death was leaked to the public in March, sparking public protests and calls for his resignation. Parkinson publically fended off a stream of accusations, including questions of when he found out about Holland's death and revelations that the inmate was given a sedative early into his stay in the chair despite claims that he'd been combative with staff.

"I was accused of everything under the sun," Parkinson told New Times.

But as the attacks from his critics intensified, Parkinson's supporters flocked to his defense, many of them opening their wallets to help him. In the wake of the Holland video's release, Parkinson received tens of thousands of dollars from individuals and local businesses. As of Election Day, Parkinson's campaign raised a total of $329,000 in monetary and nonmonetary contributions, according to campaign finance records. While the amount money he received was impressive, Parkinson said that the encouragement from his supporters was more important and buoyed him during a campaign that was tough on both himself and his family.

"I have established a solid relationship with this community, and people believed in me," Parkinson said. "It helped get me through a long year."

Even in victory, Parkinson said there was still work to be done. He plans to continue moving forward with implementing reforms to mental and medical care for inmates at the jail. He said he would work to keep the promises he made during his campaign.

"I have to put my money where my mouth is," he said.

As Parkinson prepares to embark on his third term, the issue of deaths at the jail isn't likely to fade away entirely. The FBI has yet to release the results of an investigation into possible civil rights violations in connection with inmate deaths at the facility, and legal claims and lawsuits against the county from families of other inmates who'd died in the jail remain ongoing. Holland's father, Carty, said that even though the candidates the family supported lost, their work to advocate for better treatment of mentally ill inmates through the nonprofit Andrew Holland Foundation would continue.

"We are not through. We are still going to move forward," he told New Times. "This election was a stepping stone, not a final destination." Δ

Clarification: This article was updated to reflect that the name of the Holland's nonprofit organization is the Andrew Holland Foundation.