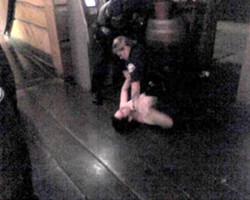 An incident in a Morro Bay bar that led to Morro Bay police officers using a Taser and pepper spray on a patron has been quietly put to rest with a settlement and no contest plea.

Just after midnight on June 8, 2012, Morro Bay Police Cpl. Mark Martin and Officer Nicole Canby, a recent transfer to the department who was training under Martin, entered the Fuel Dock Saloon in Morro Bay for a barroom check. Inside was then 23-year-old Brian Lopez Martinez and friend Joseph Ian. After a confrontation between the officers and Lopez Martinez escalated to a scuffle, officers used pepper spray and repeatedly Tasered the man before arresting him.

Lopez Martinez was initially charged with public intoxication, resisting arrest, and battery against an officer. Ian was charged separately, and pleaded out in 2013.

New Times learned that the city of Morro Bay and Lopez Martinez, who had been exploring the potential for a civil case against the city, reached a settlement in January, in which Lopez Martinez pleaded no contest to one count of interfering with an officer, received credit for time served, and was given a one-time settlement sum of money.