Not every horse is ideal for equestrian therapy.

No one knows this better than Melanie Williams-Mahan, executive director for the Atascadero-based Partners in Equestrian Therapy (PET). Since 1994, the nonprofit has run programs for children and adults with disabilities as well as for military veterans. 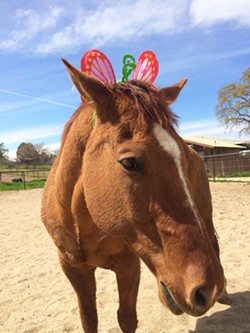 For the last seven years, one horse has stood out in particular among PETS' stable, a 17-year-old quarter horse named Chief Four Socks. Williams-Mahan affectionately described Chief as the organization's "go-to" horse; known for his quirky, kind, and unflappable personality.

"Nothing scares him, and he is very calm and patient," she said. "He is a little bit of a clown and will do anything to help a rider who is feeling anxious or scared feel better."

Chief apparently has a fun sense of humor, too, and will play jokes to amuse his riders, such as stealing the hats off people's heads. Williams-Mahan also said that riding Chief means never having to worry about him going too fast either, especially when he senses that a rider is uncomfortable or off balance.

"He's really one of the funniest horses we've had," she said. "He's perfect for our riders."

But lately Chief has been having health problems after being diagnosed with internal pigeon fever, better known as dryland distemper. After being out of commission for a time, Chief is on the mend and Williams-Mahan said PET is now trying to raise money to help cover the costs of his ongoing treatment and medication.

PET's program is based on the methodology and certificates offered through the Professional Association of Therapeutic Horsemanship. Programs like the one offered by PET are helpful for individuals with physical and cognitive disabilities, as well as those with emotional, learning, language, sensory, and emotional impairments. The organization also added a riding program for veterans in 2013.

Those who want to help Chief Four Socks can donate to the organization, which is funded mostly through donations, by going to the PET website at petslo.com and clicking the Paypal link.

• On Dec. 19, Peoples' Self-Help Housing held a grand opening ceremony for the newly completed Rolling Hills II project in Templeton. The project adds 30 more units of affordable housing to the Rolling Hills Apartments complex on Las Tablas Road. The one- to three-bedroom apartments will serve households earning up to 60 percent of the area median income, and new facilities include laundry, a barbecue area, and a playground.

• The San Luis Obispo County Bar Association recently presented Stephanie Barclay with the John L. Seitz Award for Community Service. The Seitz award recognizes lawyers whose community contributions exemplify the best attributes of the legal professions, according to a press release. Barclay recently became the legal director of the San Luis Obispo Legal Assistance Foundation, an organization she joined in 2013 and became the executive director of in 2014. In her time there, the organization has grown from a budget of $50,000 to $350,000; from one employee to four employees; from one program to three; has increased legal services for SLO County seniors, veterans, and families in need; and has more volunteers than ever before. Δ