In 1962, Lariska Dumbchenko made history as “the first ballerina to be shot into orbit.”

According to legend, when she was up in space, she “delivered handy make-up tips to an assembled crowd of celebrities back on Earth.” Currently, she dances alongside the illustrious Helen Highwaters and Maya Thickenthighya (a dancer purported to have “radioactive properties”) in the world-renowned dance company, Les Ballets Trockadero de Monte Carlo.

Raffaele Morra’s been playing characters like Dumbchenko and Pepe Dufka, a litigious dancer plagued with being pelted by vegetables, since 2001. It was in May of that year that he joined Les Ballets Trockadero, more affectionately known as the Trocks, and their comedic brand of ballet.

“They came to Torino to perform and I said, ‘I have to go,’” Morra told New Times over the phone. “I was ready to change my life. I was really bored with what I was doing in my professional career. So, I decided I was going to see everything there—the New York City Ballet and the Trockoderos. I knew it was fun and knew it was a good ballet company. I had friends that had friends in the company. …  It was that easy.”

Since their founding in 1974, the Trocks have made a name for themselves as one of the most exceptional dance companies of the last 50 years. They began as a small group of ballet enthusiasts looking for a way to take ballet out of the stuffy, more serious register it has occupied for centuries. With expert skill, the Trocks adorn themselves in the guise of female dancers (we’re talking the whole drag get-up from tiara to tutu) and perform parody versions of traditional ballets like The Nutcracker and Swan Lake.

“One of the big reasons I enjoy it is I can be myself,” Morra commented. “I can really explore every aspect of my personality on stage. I like the comedy aspect of it. I really like to make people laugh. Every time I go to the theater, I see someone really enjoying, someone really laughing. They walk out of the theater and are still mimicking what we do on stage.” 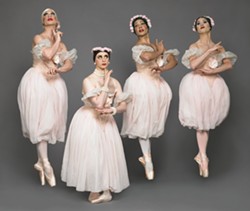 Unlike most ballets, where the dancers become almost faceless parts of the whole, the Trocks celebrate individuality. The creative team crafts elaborate characters like Lariska and Pepe and showcase each dancer’s talent in ways that a normal ballet wouldn’t. For Morra, who trained professionally in his home country of Italy, this is what keeps the Trocks fresh and dynamic over the years. They tirelessly rehearse, working on new material in addition to their standard repertory pieces, and tailoring pieces to new dancers.

“We always rehearse,” he said. “Even things that are looking improvised, it’s not. It’s very delicate, [especially] the comedy. It sounds like something easy, but it could be campy and not elegant. It could fall into being cheap. We don’t like that. … I have to say, we are in one of our best times.”

For someone who’s performed in front of Prince Charles and at the Bolshoi Theatre in Moscow, that’s quite a commendation. Last year, the Trocks celebrated their 40th anniversary and don’t seem to be slowing down anytime soon. They combine two disparate elements (comedy and ballet) with one, overarching factor—quality.

“It’s unique because it’s a very good ballet performance,” Morra said. “It’s a comedy performance, and it’s a family performance. It’s good for everyone. It’s special because, if you never really liked ballet, you can laugh at ballet with us. Well, we don’t laugh at ballet; we love ballet. But if you don’t like ballet, you can like it. If you do, you appreciate what we do. We are making an homage to ballet and ballerinas.”

And in case you’re wondering how long it takes to put that make-up on?

“About an hour and 15 minutes,”  Morra says.

Well worth the effort.

Jessica Peña’s ready to see some of those men in tights—tight tights! Contact her at jpena@newtimesslo.com.