This upcoming Memorial Day weekend, for the first time in the past eight years, thousands of people won’t gather in downtown Paso Robles, paintings and canopies won’t cover the park lawn, and stilt walkers won’t rival the height of the gazebo.

For the better part of a decade, Paso ArtsFest, put on by Studios on the Park and the city, was a unique event in the SLO County arts scene, offering free admission and activities to the community and tourists alike. Last year about 10,000 people filled the downtown park to peruse paintings for sale, watch the quick-draw event, learn how to build a masterfully sculpted sand castle, or simply sip wine and enjoy the live music. So it came as a shock to the community in February when Studios on the Park announced that the festival was canceled this year, with no immediate plans to resurrect the event next year. 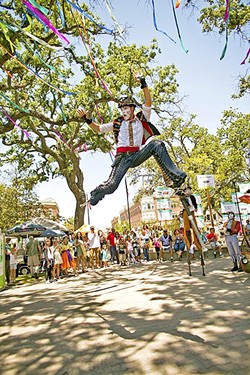 “What made it spectacular was that it was free,” said Sasha Irving, director for Studios on the Park. “Everyone got to participate in the day no matter their resources. But the volunteer planning time for an event this size is unsustainable.”

While getting enough volunteers to help for day of tasks like setup and tear-down was doable, Irving said the months leading up to the festival are harder to recruit volunteers for. Irving is the sole full-time employee at the nonprofit gallery, and the festival required five months of planning from a committee of about 13 volunteers and city staff putting in around 10 to 40 hours of work a week.

For years, many of those hours were put in by Anne Laddon, Irving’s mom and founder of Studios, and Barbara Partridge, Studios’ board president. In the months leading up to this year’s Memorial Day weekend, Laddon realized she needed a hip replacement and wouldn’t be up to putting on the event, and Partidge knew she couldn’t go it alone. Both women are in their 70s and Studios’ volunteer base skews older, so when these two key women dropped out, there was no one readily available to replace them.

“How does our generation invest ourselves in a way that we can sustain?” Irving, who is in her 30s, said. “If you work a 9-to-5, how do you knit in community service to that? Those are huge questions.”

When the festival started in 2009, the city partnered with Studios by offering donated city employee time to plan the event, which continued throughout the festival’s run. That first year, Paso ArtsFest cost about $55,000 to put on, the lion’s share of which came from donations from the local Rec Foundation, Senior Citizens’ Advisory Committee, and Library Foundation.

“We wanted to see Studios be successful and bring art to the forefront of our community,” said Meg Williamson, assistant city manager. “It was an organic, symbiotic relationship for that first festival.”

While 4,000 people attended that year, the event would more than double by 2016, when 10,000 people filled the downtown area for the event and costs jumped to $120,000. Things like canopies for the artists and wine for the wine bar were borrowed or donated for the event. But as attendance grew, income from sales of paintings and artists’ fees dropped drastically. At its peak in 2014, the festival brought in $17,000, but last year it made just $9,000.

“We have lots of committed, generous philanthropists in town,” Irving said. “We’re a town of modest means with champagne tastes. People appreciate art here, but they have families to feed and mortgages to pay.”

Looking to the future, officials from both the city and Studios are uncertain if Paso ArtsFest will be back. But they do know that they want the community members to have more art, more often.

“We’re each very appreciative of what the other has brought to the table for as long as we were able to do it. It is hard to let go of it,” Williamson said. “We’re really having to take a long hard look right now at how we program the downtown park and how we might be more strategic to support the arts.”

Arts Editor Ryah Cooley can be reached at rcooley@newtimesslo.com.