Brewers, distillers, and winemakers can now set up shop in downtown Paso Robles. 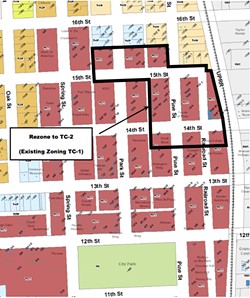 The Paso City Council revised its downtown zoning code on Jan. 16 to allow for breweries, wineries, and distilleries—businesses that were all previously barred from the downtown area since they were labeled as "manufacturing." Due to the rising popularity of mixed-use, "micro" production facilities, what's generally considered appropriate in a downtown district has evolved, according to Paso city staff.

"New 'micro' breweries, distilleries, and wineries have become popular in other downtown districts since they often include tasting rooms and/or taverns that generate activity," a city staff report read. "They also tend to be compatible with surrounding restaurants and entertainment uses and add to a vibrant downtown atmosphere."

The report also noted that because of micro facilities' smaller scale, typical production impacts like "significant wastewater pre-treatment, truck traffic, or outdoor storage of materials" could be avoided. All wineries proposed in the downtown zones will require a conditional use permit, and so will any distillery or brewery larger than 10,000 square feet.

Local architect Larry Gabriel expressed his support for the zoning changes to the council, saying he's "worked on several projects that have been turned down based on the [zoning] requirements."

In addition to accommodating the alcohol-related businesses, the City Council tweaked the zoning code to authorize wine tasting at the future Paso Market Place project planned on Spring Street. It also approved zoning changes that will allow for ground-floor offices on 13th to 15th streets between Spring Street and Railroad Street, as it's "an area that does not appear to be trending toward significant pedestrian activity."