Between July 13 and 22, Paso Robles removed an estimated 19,000 pounds of trash and discarded items from the Salinas Riverbed between Niblick Road and its city limits to the north. 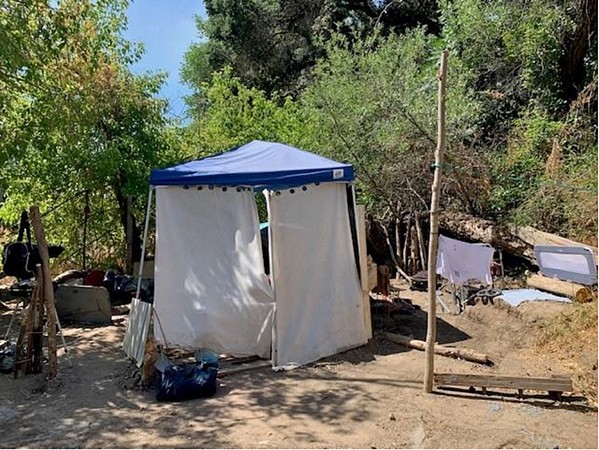 Paso police also arrested six area residents for charges associated with having an illegal fire, drug possession, and refusing to vacate and remove property from a designated high risk fire area, according to a July 23 press release.

At the June 3 Paso City Council meeting, Paso Fire Chief Jonathan Stornetta said due to drought conditions and an increased fire risk, he declared the area as high risk on May 24 due to the extreme drought and an 18 percent increase in riverbed fire activity over last year.

"There is an imminent threat to life safety for those individuals living in the riverbed," Stornetta said.

Paso Police Chief Ty Lewis told New Times that the cleanup is the most recent effort to clear the riverbed.

The 9.5 tons of stuff recently hauled out of the riverbed joins 41.8 tons of trash that the city removed from the riverbed between September 2020 and June 2021 to address fire hazards associated with homeless individuals in the riverbed. In addition, the city cleared 181 acres of hazardous fuels in the riverbed during 2020, and put 650 goats in the riverbed corridor to graze on vegetation earlier this year.

Fires are just one of the issues the city addresses in a FAQ sheet the city released in June due to what it said was an "increase in requests for information about legal and safety issues surrounding homeless residents and riverbed clearing."

The FAQ sheet states that the Paso Robles Police Department typically responds to about 1,000 calls per year for service related to homeless and mental health related needs. Midway through 2021, the department had already responded to 800 such calls.

"As the city continues cleanup efforts, there are more homeless moving from the riverbed to the city, parks, etc. This relocation out of the riverbed is likely contributing to the increase in calls for service," Lewis told New Times via email. "Most of our calls for service are on the west side of Paso Robles ... west of the Salinas River. Many of the homeless gravitate to this area to obtain needed services, such as what ECHO provides."

ECHO (El Camino Homeless Organization) Paso Robles started providing services about seven months ago at a Motel 6 that was converted into low-income housing, an emergency shelter, and homeless services center. The project was possible through a partnership with the Housing Authority of San Luis Obispo, Peoples' Self-Help Housing, and a $15 million Project Homekey grant.

ECHO President and CEO Wendy Lewis presented an update at the June 3 City Council meeting, saying that ECHO had filled the 42 rooms available for overnight shelter and exceeded its goals within a month of being open. The shelter has 50 available beds that serve as emergency overnight shelter and part of a 90-day intensive residency program designed to get people housed.

"We are full almost every single night, almost since the beginning of our operations," she told New Times, adding that about 20 percent of the beds are allocated for the 90-day program.

At the June 3 meeting, she said that ECHO Paso Robles had served 500 unduplicated individuals in its first six months and helped 23 people get employed and 34 people get housed.

ECHO's Lewis told New Times that those numbers had increased since the meeting. Forty individuals and families have found permanent housing, she said, and as of the end of June, 30 people had been employed. Δ