Paso continues to have the highest COVID-19 cases

On Nov. 16, San Luis Obispo County reverted back to the state's purple tier in California's Blueprint for a Safer Economy, a response to a rapid surge in positive COVID-19 cases. 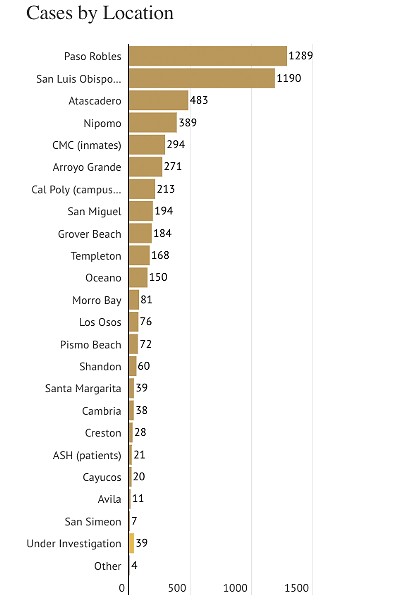 The county has had more than 5,400 confirmed cases of COVID-19 since the beginning of the pandemic. As of Nov. 18, 757 of those are active COVID-19 cases. Paso Robles has been leading the pack of SLO County cities with the most positive cases since March, with 1,308. On two separate occasions in August, the city called on area residents to follow the safety guidelines.

However, some City Council members said they don't believe the virus is cause for alarm and every council member supports the city's current COVID-19 response, which is through education.

At the Nov. 17 City Council meeting, council members considered options for increasing outreach, education, assistance, and enforcement efforts in response to the virus.

"It's the people and their actions that could put themselves at risk if they don't use common sense and good judgement," Strong said.

He started off his comments by saying there is a strong feeling that the virus and responding to it has become a politicized battle rather than an objective battle.

"We are supposed to be a nonpartisan organization and our positions are nonpartisan," Strong said. "I would like to point out that the governor's guidelines are not mandates. There is no legislative action in this regard."

Councilmember John Hamon said he personally believes "COVID-19 is not a major threat."

"It's not as bad as people are trying to portray this as a death sentence," he said. "In my opinion we're seeing that 99 percent of the general population does not have substantial issues with it after they've had it, and I've had a lot of people who have had it talk to me about this."

Instead, the Paso Robles Chamber of Commerce will be taking complaints from the community about possible safety guideline violations. The chamber will reach out to the person or business in question to educate them on safety practices. If the chamber believes that there is an egregious violation occurring, it will forward that information to the police department, which will decide whether to send law enforcement personnel and or reach out to code enforcement, which would then issue a citation.

The council directed staff to proceed with the city's current COVID-19 response of education and enforcement—administrative citations for egregious violators—and return to council with additional microgrants for local businesses if funding is available. Δ