With one more hearing left, Paso Robles is moving forward with its plans to transition the city's elections to a district-based process.

At the March 19 City Council meeting, council members discussed five potential district boundary maps and voted for Map E, which split the city into four districts, to be brought back to the final hearing on April 6. 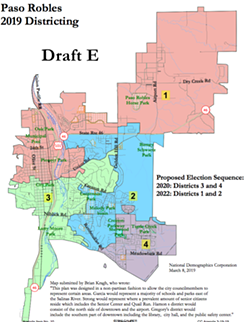 Paso City Council members are currently elected in citywide elections, meaning each council member may reside anywhere within city limits. Moving to a district-based system would only allow residents to vote every four years for a council member who resides in their district.

In August 2018, the city received a letter from the Shenkman & Hughes law firm, alleging that the city's electoral system violates the California Voting Rights Act and threatened the city with litigation if it didn't adopt a by-district system. In September 2018, the City Council approved a resolution to express its intent to transition to district elections.

According to the Santa Monica Daily Press, Shenkman & Hughes also threatened the city of Santa Monica with litigation over its electoral system. The city went to court, and on Feb. 15, Judge Yvette Palazuelos ruled in favor of the law firm and ordered the city to use a seven-district map.

The ruling stated that the city's former at-large election system suppressed the voting power of Santa Monica's Latino population, which was historically clustered in one neighborhood. Palazuelos ordered the city to hold a district-based special election July 2 to elect seven new council members.