As restaurants in SLO County prepare to open their doors for dine-in service, while following the 6-foot guideline and occupancy capacity, Paso Robles is looking to expand outdoor seating in the park for its downtown businesses and, potentially, via parklets.

At the virtual May 20 meeting, Paso Robles City Council unanimously approved the City Park Dining Program. Thursdays through Sundays from 5 to 10 p.m., the decomposed granite area west of the museum will be utilized for a reserved dining area managed by the Paso Robles Chamber of Commerce. 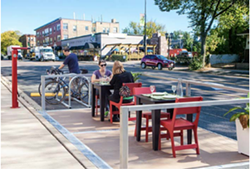 The chamber will organize delivery and set-up of additional tables and chairs for the area, and it will apply for a temporary permit to allow businesses to serve alcoholic beverages during the designated time period.

The council also directed staff to determine how to replicate the program at the city's other parks.

Althought there was overwhelming support for the program, public commenters were split on putting parklets downtown, citing concerns about sufficient parking and street closures. A parklet is a leveled platform built over an existing parking space in front of a restaurant.

According to the staff report, the chamber said many restaurants were concerned about the cost of constructing a parklet, so it suggested closing 12th and Park streets four nights a week or Park Street one night a week to allow restaurants to place additional tables in the street for dining.

Jeffrey Wiesinger of Jeffry's Wine Country BBQ told the City Council that he opposed the street closures because his customers utilize Park and Pine Streets for curbside pickup—which is working for his restaurant during this time.

Business owner Danny Inger questioned the city's plans to help local businesses reopen. He said he believes that "the experts" overreacted to the virus, suggested that the city "get out of the way," and send business owners reopening recommendations but not enforce them.

"Also send an email to the citizens telling them that we live in a free and risky world and that they should live at their own risk," Inger said. "Businesses should open up immediately as they do not need the council's permission or guidelines. They have constitutionally protected freedoms if only they will stand up and take it."

During the May 20 meeting, council directed staff to continue the current complaint-driven educational approach to any businesses that aren't complying with public health orders and guidelines, with an enhanced approach to public information and community engagement around these issues.

The council is slated to revisit parklets and street closure options in June. Δ