With $3.5 million in hand, the city of Paso Robles is moving forward with a water recycling project included in the as-yet unapproved plan to bring the Paso Robles Groundwater Basin into sustainability.

"We're still moving forward with implementation of the plan," city Public Works Director Christopher Alakel told the Paso City Council on June 21. "We recently got some grant funding to do some projects, including a portion of our recycled water project." 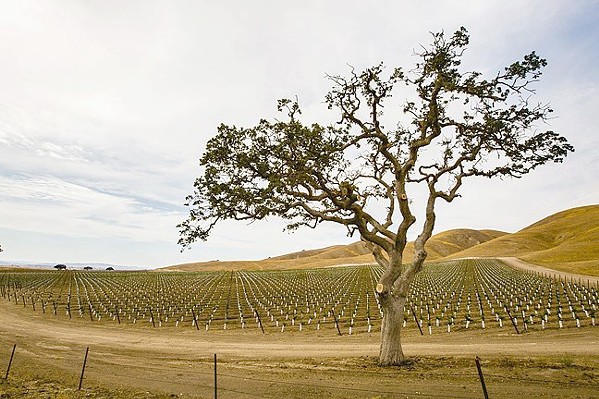 In May, SLO County received about $7.6 million for management projects in the Paso basin from the Department of Water Resources, which gave out almost $200 million in grants to agencies managing critically overdrafted basins in the state. The Sustainable Groundwater Management Act passed in 2014 requires those water basins to implement groundwater sustainability plans (GSPs). While the state rejected the Paso GSP submitted in 2020, revisions to that plan are ready for approval from the four groundwater sustainability agencies that collectively manage the basin.

During its June 21 meeting, the Paso Robles City Council—acting as the Paso Robles Groundwater Sustainability Agency—was the first to approve that revised GSP, which needs to be resubmitted to the state by July 20.

Iris Priestaf from Todd Groundwater, the consulting company hired to work with the state on plan revisions, said they've been working with the Department of Water Resources since last June, when the state first indicated it had potential issues with the first iteration of the Paso GSP.

"We looked at basically the whole thing. The revisions start on the cover," Priestaf told council members. "We did everything they asked and clearly I'm hoping for approval so we can continue with groundwater sustainability planning."

All total, Priestaf said they revised and replaced seven sections of the GSP and added one in response to the state's requests. The state wanted Paso's GSP to include more details about the target groundwater levels established in the plan, why they were picked, and what their impacts could be on water users, especially shallow domestic wells. California also wanted more information about how the surface water, such as the Salinas River and Upper San Juan Creek, was interconnected with groundwater and what the impacts of low groundwater levels could be on those habitats.

As part of the $7.6 million SLO County received in May, $1.4 million was to address data monitoring gaps by adding monitoring wells, stream gauges, and climatologic stations over the basin.

In an announcement about the state funding, the state touted the recycled water project in Paso as one that will reduce the need to pump groundwater from the basin and "further improve the sustainability of the city's water supply and provide a supplemental water supply to irrigators in the basin."

Paso Public Works Director Alakel told New Times that recycled water can also be a steady, consistent supply of water for that the city and irrigators can rely on.

"Recycled water is something that's pretty insulated from the issues we're having right now in the state with drought," Alakel said. "It really has some drought resiliency that other water streams don't necessarily provide."

The Shandon-San Juan Water District was slated to vote on the revised GSP June 22, San Miguel Community Services District is scheduled to hear it on June 23, and SLO County on July 12. Δ