A pair of upcoming North County groundwater studies are expected to shed new light on the hydrogeological conditions of two key water sources in the region.

The Paso Robles Groundwater Basin is one of three basins in the state chosen to participate in a Stanford University study that will deploy state-of-the-art aerial electromagnetic technology to better understand its characteristics. 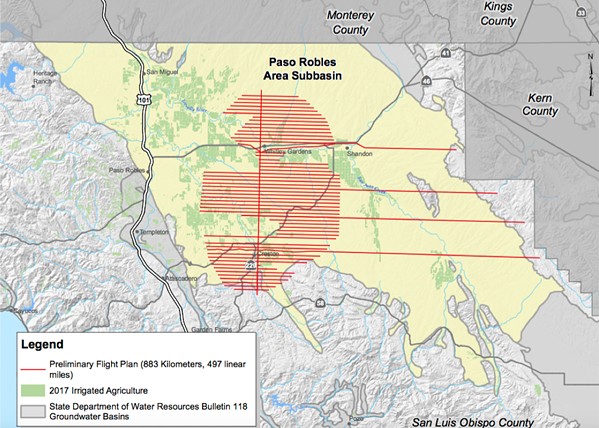 Over five days in October, a low-flying helicopter equipped with scientific instruments will zig-zag over the rural areas of Creston, Shandon, and Whitley Gardens. A device attached to the helicopter that looks like a large hoop will transmit a weak electromagnetic field and collect detailed data about the aquifer to depths of 1,500 feet below ground.

The results of the 497-mile flight will offer "a more complete picture" of the basin, according to an Aug. 13 SLO County staff report. It will help experts "better understand where groundwater occurs and flows" and be used to refine the basin's hydrogeologic model. The data could also help officials identify the best locations for groundwater recharge projects.

The pilot study is a partnership between Stanford, the California Department of Water Resources, Denmark's Ministry of Environment and Food, and the three participating local agencies. The local agencies are SLO County, Butte County, and the Indian Wells Water District in Kern County.

The Paso basin, which serves most of North County agriculture, is in critical overdraft, according to the state. The county Board of Supervisors unanimously approved the basin's participation in the study on Aug. 13. The project is expected to cost $2 million, but SLO County's portion totals $200,000.

"The Paso basin is fortunate to be the third area selected," county staff said in their report. "This innovative technology will collect groundwater basin data, which would have taken years, in just a few days. This could change the way the state is looking at groundwater basins."

Also on Aug. 13, SLO County supervisors approved entering a partnership with the U.S. Geological Survey (USGS) to study the groundwater conditions of the Adelaida area, adjacent to the Paso basin.

That area is not officially defined as a basin, and its hydrogeology and water levels are less understood. But increased vineyard development throughout the region has raised concerns among landowners.

In its study, the USGS will spend one year compiling and reviewing the existing Adelaida groundwater data. That will cost about $64,000. Supervisors will then decide whether to approve the USGS's investigation of new data sources and analyses, which would be considerably more expensive.

The results of the USGS study could serve as the scientific backbone for an ordinance to regulate well drilling or water use out of the Adelaida groundwater area.Δ