The city of Paso Robles will ask the San Luis Obispo County Board of Supervisors to consider dedicating an annual portion of city-generated property taxes to help fund affordable housing projects in Paso.

On Oct. 3, the Paso City Council unanimously authorized the submittal of a formal letter to SLO County 1st District Supervisor John Peschong, which was signed by Mayor Steve Martin, making the request. 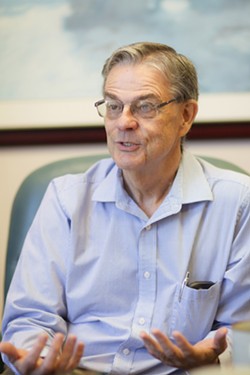 Paso asks that the county earmark "up to 5 percent of the property taxes collected each year from property owners in the city of Paso to support the development of low-income housing in this city."

"The time has come for the city and county to effect real change in the inventory and cost of housing," a draft of Martin's letter reads. "These funds represent the 'tipping point' for organizations such as the Paso Housing Authority, Habitat for Humanity, People's Self-Help Housing, and others to finance desperately needed housing."

"This is not something forced on anybody else," Martin told New Times, but added in his letter that, "of course, this program could be made available to the other cities in the county if so desired by the Board of Supervisors."

The county will discuss its current affordable housing policy—the Inclusionary Housing Program that requires housing developers build affordable units or pay in-lieu fees—in November, and the Homebuilders' Association of the Central Coast has said it will advocate for its repeal. County supervisors Adam Hill and Bruce Gibson have opposed that stance and also called for starting a $5 million revolving fund dedicated to supporting affordable housing production.

In the wake of murmurs that the county's inclusionary program is at risk, on Oct. 3, the SLO City Council passed a formal resolution supporting the program.

Peschong said he hadn't received Martin's letter by press time and declined to comment on its contents. Δ