A Paso Robles police sergeant is under investigation after allegations that he committed a "serious criminal act" surfaced last month.

Paso Police Chief Ty Lewis confirmed that the officer, identified as Sgt. Chris McGuire, has been on paid leave since May 9 while the SLO Sheriff's Office conducts an investigation into the unspecified allegations.

"Regretfully, one of our own has been accused of tarnishing our badge," Lewis said in a written response to questions from New Times.

Lewis said his department is fully cooperating with the Sheriff's Office, and had notified the SLO County District Attorney's Office of the allegations, but he declined to say what the details of the allegations were. 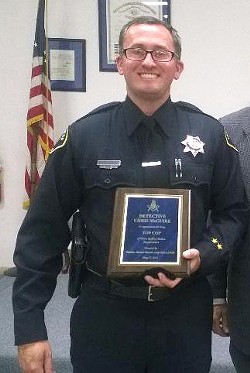 "I'm sorry I cannot be more specific on the nature or source of the allegations," he said. "The Sheriff's department is in the middle of an investigation, and I cannot release more information at this time."

A spokesperson for the Sheriff's Office confirmed there was an active investigation but also declined to specify the nature of the allegations against McGuire. SLO County Assistant District Attorney Eric Doborth said that the DA's office was aware that McGuire had been placed on leave, but said no case has been referred to the office.

McGuire was hired by the Paso PD in 2012. Prior to joining the department, McGuire worked for the Porterville Police Department. On Oct. 20, 2009, McGuire shot and killed Joe Edwin Bowles, 25, of Porterville, after a foot chase and physical confrontation. McGuire returned to duty in November 2009 after a departmental review determined that the shooting was within the Porterville PD's guidelines related to the use of deadly force.

In his statement to New Times, Lewis reassured Paso Robles residents that his department was committed to protecting them.

"I want every community member to know that despite the serious allegations against this particular employee, the men and women of the PRPD are dedicated and ethical public servants," he said.