Paso Robles residents should get used to seeing the bubble-shaped pods of video cameras in public areas. They aren't going anywhere any time soon, according to city officials.

After a yearlong pilot program, the Paso Robles City Council voted unanimously on June 17 to continue the use of the camera pods, which police say have helped enhance public safety in the city. 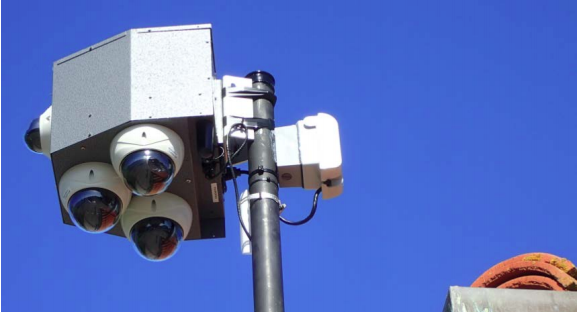 The police department currently controls 15 total camera pods providing 58 different recording views for police to review. Each pod can be mounted on a pole or streetlight and has flashing blue lights to increase their visibility. The pods, which were first installed in April 2017, are portable and have been placed in several locations in the last year including city parks and the Paso Robles Event Center during the 2017 Mid-State Fair.

According to Lampe, footage recovered from the cameras has already been used to investigate criminal cases. In May 2017, an officer requested footage from a camera pod to help investigate reports of an adult allegedly furnishing and smoking marijuana with a minor at Centennial Park. In July of that same year, the California Highway Patrol requested footage from a camera pod set up near the event center while investigating a vehicle theft.

But not everyone is sold on the presence of the cameras. Mayor Steve Martin said he'd heard from some residents who were concerned that the pods represented an intrusion of their privacy. Resident Jeff Horton said he wanted more information about how the units were monitored and if they were cost effective.

In late August, an anonymous Paso Robles resident started an online petition demanding that the pods be removed, characterizing them as "another blow to our right to privacy." As of July 25, the petition had 54 signatories.

At the meeting, Lampe addressed some of those concerns, stating that the cameras were placed in public areas and did not look into residents' windows or backyards.

"The only view you can see from these cameras is what you'd see walking down the street," he said.

Paso Robles initially purchased the camera system using a $62,500 grant from the California Board of State and Community Corrections. Reoccurring costs to continue the camera program were estimated at $25,000 annually. Currently, Lampe said he was not aware of any plans to expand the program. Δ