As the number of positive COVID-19 cases rise in Paso Robles, the city is once again calling on the community to adhere to safety guidelines with a focus on the Latino community.

At the Aug. 18 City Council meeting, City Manager Tom Frutchey said the San Luis Obispo County Public Health Department has been tracking the increase in cases and found that there isn't a single set of primary causes for the increase. 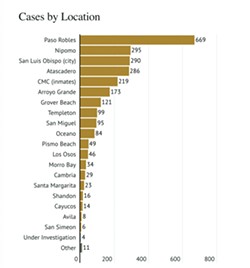 According to a city staff report, most new cases are through individual transmission of people "sharing their air" at private, generally indoor, gatherings and other settings.

Frutchey echoed statements he made in an open letter to Paso Robles residents on Aug. 3, saying that many people were still not adhering to safe practices, including maintaining social distancing, wearing effective face coverings, and washing their hands frequently.

Councilmember Fred Strong said he agrees the city should do more outreach but doesn't want local government to crack down on residents and regulate their lives.

"I want us to be very careful in how we do this so that we don't become 'Big Brother' again and go too far overboard," Strong said.

Paso has spent more than 7,000 hours and approximately $150,000 in out-of-pocket expenses responding to the pandemic so far, according to the staff report. The Federal Emergency Management Agency and CARES Act funding are expected to reimburse some of that expense.

Strong said he noticed that people in minority groups are the ones who aren't wearing masks and taking safety precautions.

Yessenia Echevarria, founder of the grassroots organization Mujeres de Exito ("Women of Success"), spoke during public comment about her concerns over COVID-19 information being translated for Spanish and Indigenous-language speakers, the city's hands-off and education-only approach to enforcing safety guidelines, and the number of Latino community members that are being infected by the virus.

Echevarria told New Times that her organization's initial goal, when it was established in 2014, was providing a resource for Latino women diagnosed with breast cancer. The inspiration came from her mother's breast cancer diagnosis the same year, and the group became a network of women for support, translation, and resources.

When the COVID-19 pandemic was felt locally, Mujeres de Exito pivoted their mission to help educate, provide resources, advocate, and fundraise for families financially affected by the virus.

Mujeres de Exito is getting the word out to Spanish speakers when the county and city release new COVID-19 information, but Echevarria said sometimes the information is translated incorrectly. She said some of the information seems like it was translated with Google Translate, which isn't effective.

"You can't compare educated affluent vocabulary with people who are working and who may not have a high level of education, so it all gets lost in translation," she said.

Echevarria said Mujeres de Exito has formed relationships and trust with the Latino community, so instead of calling the city or county for information, they call her. The trust, she said, in some cases, also stems from the individuals' undocumented status or if they're currently in the process of becoming a U.S. citizen or getting a visa.

The organization has done Zoom calls in Spanish on how to apply for unemployment, what distance-education is, and mental health services during the public health crisis. It has even been able to provide 350 people with donated produce.

The organization also reached out the county when workers called Echevarria with questions on whether to go to work after learning that co-workers who tested positive for COVID-19 were still working.

"There's just a lot of fear to even speak up for safety procedures in the work environment. I called the county for those individuals, and they weren't helpful. They wouldn't do a safety check and said they couldn't enforce anything," she said.

There's a disconnect, Echevarria said between Paso Robles at large and SLO County and its Latino and Indigenous communities.

Paso Robles Mayor Steve Martin concluded the Aug. 18 meeting discussion by stating he is working to form a Citizens' COVID-19 Coalition in conjunction with Travel Paso, Paso Robles Unified School District, the chamber of commerce, local media, and concerned community members. An extra effort will also be made to provide information in both English and Spanish.

"But the bottom line is unless we get a handle on this, it's going to keep our economy clamped down. And I can't help but look at the numbers and the 93446 area code and think if those numbers are only half as big, we'd be so much closer to being in compliance countywide that our businesses countywide could start reopening," Martin said. Δ