Paso Robles and Grover Beach don't have a short-term rental ordinance quite yet, and creating one has been a contentious issue since day one. 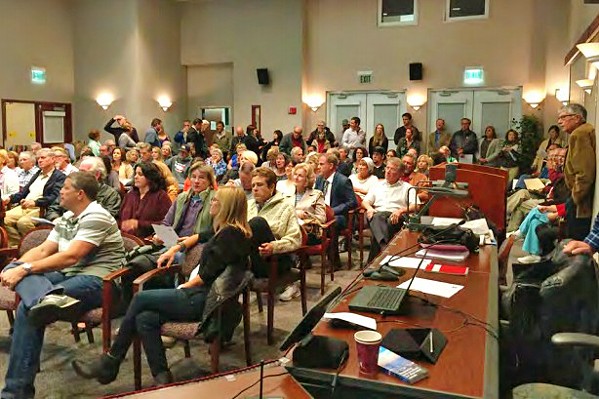 At the meeting, Mayor Steve Martin said that there was a lot of time poured into the creation of the ordinance from both sides of the issue, with 29 meetings to show for their trouble.

"I've been thinking about this a lot. I think we've all been thinking about this a lot, and I reminded myself that this whole issue, the discussion of this whole issue, started a few years ago right here in this room with a room similarly filled with people who were divided over the issue, but with one purpose. To make sure that everybody was treated fairly and that Paso Robles was kept a good place to live for people to maximize the use of their property without infringing on the rights of others," Martin said.

The city has been tossing the idea around since 2015. In 2017, the City Council opted not to adopt an ordinance. The issue was revisited a year later as the community voiced more concerns about vacation rentals in their neighborhoods.

The loudest concerns came from the residents who lived on Hilltop Drive.

During public comment at the June 5 meeting, Vicki Jeffcouch, a Hilltop area resident, urged the council to give the community its neighborhood back.

Jeffcouch said that before her neighbor died, she had him over for dinner and helped take care of him. After his passing, the home was sold and turned into a vacation rental. She said there's always a bachelor party, bachelorette party, or even a family reunion happening at the house.

"I have a granddaughter living with me, and I no longer let her go in the front yard or down the driveway unless I'm out there with her. I can't let her go get the mail. She's 8 years old and I have no idea who's in that house," she said.

The ordinance, after the approval of its second reading on June 18, will become effective in the middle of July.

It requires holders of existing short-term rental business licenses to apply for a short-term rental permit when the ordinance becomes effective. The ordinance sets a maximum occupancy for daytime and nighttime and a minimum on-site parking requirement, with an exception process for properties with limited parking. A good neighbor brochure will be created for renters, and neighbors within 50 feet of a rental will be notified. A complaint hotline will be established with a 30-minute response requirement.

Home share (where the property is owner-occupied) permits aren't restricted in any zone in the ordinace. It actually expands the definition of home share to allow a home to be rented without the owner present for a maximum of 30 days annually.

According to the staff report, short-term rentals are positive revenue for the city. The city's transient occupancy tax summary shows that $365,731 was generated in 2017 and $491,017 was received in 2018.

Heather Taber has a hand in the revenue that's being generated, and she spoke at the June 5 meeting. A family that owns a short-term vacation rental in the downtown area currently employs her to clean and help maintain the home. Taber said, in her experience, a majority of people who rent these homes are families and middle-aged adults. She's never had an issue when she cleans the home.

"The family I work for has their city licenses, pays their taxes, and I pay my taxes. I get a 1099. They are following all the requirements from the city. If these stipulations pass, I will be out of a job that helps support my family of five. Businesses will shut down because of a lack of clientele, and the owners of short-term rentals will suffer a huge financial burden," Taber said.

A few days before Paso's discussion, the city of Grover Beach also passed its first reading of a short-term rental ordinance.

During the June 3 Grover Beach City Council meeting, City Manager Matthew Bronson said the reason the city has had some issues with short-term rentals is probably because the city doesn't currently regulate them.

"We have acknowledged that there have been a few that have been poorly managed and you've heard that from the public," Bronson said, "and again, we point to that's the whole purpose to the ordinance is that we have no regulations and those people have been able to do, in essence, anything that they would like to do at this point."

Grover Beach is taking a different approach with its ordinance; the city is allowing short-term rentals in residential and coastal zones. The ordinance will cap the rentals at 40 in the coastal zone and up to 60 in non-coastal zone areas.

The ordinance calls for the creation of a good neighbor brochure as well, a 30-minute contact to resolve issues, and a limit on the number of guests allowed in a house.

Once the Grover Beach City Council adopts its ordinance, permit information will become available on the city's website and staff will send a letter to existing short-term rental owners, letting them know they are required to submit an application within 60 days of the effective date of the ordinance.